Seven fatalities have been reported as of 1 p.m., according to the Ministry of Public Safety and Security, with another three people missing in the southern cities of Busan, Ulsan, as well as on the country's resort island of Jeju.

The death toll includes a firefighter who went missing Wednesday while on a rescue operation in Ulsan, some 410 kilometers southeast of Seoul. The body of Kang Ki-bong, 29, was found at around 11:00 a.m., some 3 km away from where he was swept away by currents.

It said 198 people from 90 households have been evacuated from their homes due to flooding.

Some domestic and international sea routes are still restricted, according to the ministry.

"We must promptly conduct an inventory on the damage and quickly provide the support needed for restoration," Hwang said.

The prime minister added the government will improve its disaster-related policies to prevent similar damage in the future.

Later on Thursday, the safety ministry said it will provide some 8 billion won (US$7.19 million) of special grants to the typhoon-hit regions to promptly deal with the aftermath of the disaster. 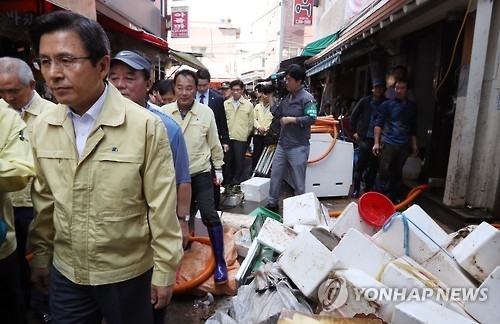