The talks held on Wednesday came on the heels of an agreement to seek a South Korea-EAEU FTA that leaders of South Korea and Russia reached during a summit in Vladivostok in September.

The EAEU, launched in January 2015, groups Russia, Belarus, Kazakhstan, Armenia and Kyrgyzstan. It has a combined population of 180 million with its gross domestic product reaching US$1.6 trillion.

During the talks, the two sides reviewed the outcome of a joint feasibility study that has been made since December between the private sectors of the trade blocs and discussed how and when to start negotiations to seal an FTA. 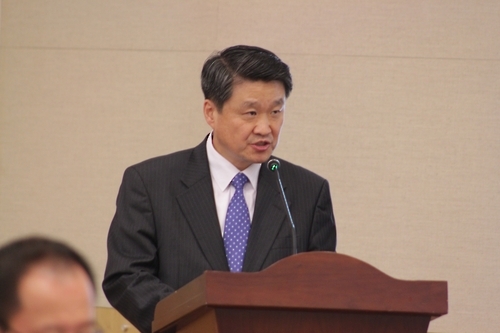 The talks were followed by a business forum at the South Korean Embassy in Moscow that brought together business leaders of South Korea and the five-nation union.

At the forum, Kim said in a congratulatory speech that the EAEU has emerged as an attracting market of a high development potential with its rich energy resources and a high level of basic scientific technologies while South Korea is a trade powerhouse with state-of-the-art manufacturing technologies.

He expected that merging the advantages of the two sides will "make South Korea and the EAEU the most suitable partners for achieving industrial development and economic growth."

The EAEU, which has been trying to integrate other former Soviet republics and other countries into the organization, is engaging in joint feasibility studies with Egypt, Israel and India. An FTA between the group and Vietnam took effect on Monday.

A source familiar with the South Korea-EAEU talks took a dim view that the two side will start the FTA negotiations within this year, as both of the two sides are to undergo internal procedures. "Even if they start talks, it will not be settled in the near future because it takes a few years for them to close an FTA deal," he said.