Park's remarks followed a string of strikes by unionized workers in the public and financial sectors, as well as other businesses, who have railed against the government's drive to expand a performance-based salary system and the ongoing restructuring of major industries.

"The labor unions of some conglomerates, and the public and financial sectors still refuse to put down their vested interests, while bills, aimed at reforming the rigid labor market, have yet to pass through the National Assembly," Park said during her visit to a job fair at the Convention and Exhibition Center in southern Seoul.

"It is really regrettable," she added.

The government has been pushing for a set of bills for labor reform, which Park said are critical for creating jobs, cushioning the shock from the restructuring of the financially-troubled shipbuilding and shipping industries, and add flexibility to businesses' employment procedures.

But opposition parties and labor unions have been against these bills, arguing it would "polarize" the labor market and create other side effects.

Underscoring the need for South Korea to keep reinventing itself, the chief executive said the country should not lag behind other nations in terms of reform and innovation.

"With the whole world competing to reset their respective economies, South Korea should not drag its feet on reform and innovation," Park stressed.

"In the era of the fourth industrial revolution, creative innovation and bold steps are the source of national competitiveness and the driver of job creation," she added, referring to the ongoing economic revolution linked to the fusion of cutting-edge technologies such as big data and the Internet of Things.

Park, then, renewed her resolve to push for her signature "creative economy" policy, while stressing the important role played by small enterprises and venture firms in creating jobs for young people.

Creative economy refers to her much-trumpeted growth strategy that seeks to create new business opportunities, jobs and industries through the fusion of new technologies, culture and other available elements.

"Our businesses should create new industries and jobs, which have not existed before, through creative innovation, while young people, armed with creative ideas, should boldly apply for new jobs," Park said.

Set up by some 352 startups and small firms, the job fair aims to recruit some 1,200 people. Organizers expect some 10,000 job seekers to attend the one-day event.

Hosted by the Ministry of Employment and Labor, the Ministry of Science, ICT and Future Planning, the Small and Medium Business Administration and the Youth Hope Foundation, the event was designed to encourage young people, who tend to apply for jobs in top-tier firms, to consider small, yet promising enterprises. 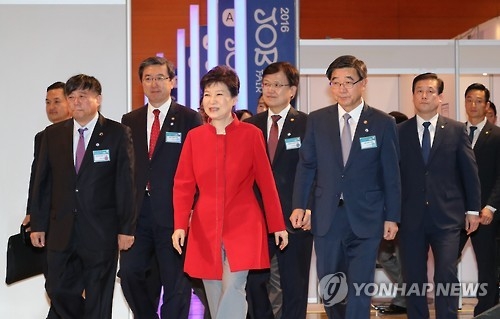