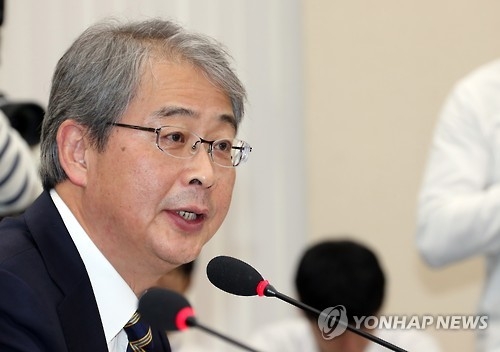 He dismissed a call for the tightening of restrictions on mortgage loans.

"It's not desirable to frequently raise and lower the debt-to-income (DTI) ratio (required for households' borrowing)," he said. "It's more urgent to improve the quality of household debts and slow the growth pace."

It measures an individual's debt payment to his or her overall income.

In 2014, the authorities eased the rules by jacking up the DTI ratio to 60 percent from 50 percent for those seeking to purchase houses in Seoul in a bid to help boost the real estate market.

"Compared with the DTI standards in foreign countries, 60 percent is not that high," he said. "The average DTI ratio actually applied (in South Korea) is 30.3 percent."

He also played down worries about continued hikes in housing prices following the Aug. 25 announcement of measures to control apartment supply, saying it's a tentative phenomenon in some specific regions, in particular three districts in southern Seoul: Gangnam, Seocho and Songpa.

In case of Daewoo Shipbuilding & Marine Engineering Co. (DSME)'s impaired capital base, Yim said the state-run Korea Development Bank, also the main creditor of the troubled shipbuilder, is reviewing various ways for a "fundamental improvement" of the shipyard's financial structure.

"Steps to address its capital problem should be taken within this year," Yim said. "If so, the problem at DSME, with the trading of its stocks currently suspended, can be resolved."

He also requested the National Assembly's legislative support for the FSC's reform drive.

He cited the need to revise legislation on banking services and the capital market to introduce Internet-only banks and transform the Korea Exchange, which is the nation's sole bourse operator, into a holding firm.