SEJONG, Oct. 6 (Yonhap) -- South Korea's government on Thursday started to examine the effectiveness of German carmaker Volkswagen's recall measures for its sports utility vehicles to check whether necessary changes can be made based on the plan.

The Ministry of Environment and the National Institute of Environmental Research (NIER) together launched the examination that could take upwards to six weeks on devices, including the Portable Emission Measurement System, (PEMS) in the Tiguan compact crossover vehicle.

The move came a day after the auto giant submitted the recall plan to the local government for some 27,000 Tiguans sold here, saying it will change the cars' software.

The government said it is planning to look into the proposed changes and see if they affect the vehicles' emissions and fuel efficiency.

If it finds problems despite the planned recall measures and if experts concur the situation cannot be rectified, the ministry said it will review handing down a replacement order for the problematic vehicles.

In November, South Korean authorities fined the German carmaker 14.1 billion won (US$12.5 million) and ordered a recall of some 126,000 diesel vehicles for manipulating emissions results with the so-called defeat device to meet local standards.

In June, the environment ministry rejected Volkswagen's plan to recall its vehicles for the third straight time, saying the carmaker did not admit to using a defeat device to trick vehicle testing.

The ministry sent official documents to the German carmaker twice earlier this year, stipulating that no response will be seen as an acknowledgment of using the device, but the carmaker did not respond.

The automobile maker said it will first submit the recall plan on the Tiguan, which was the most sold model in South Korea, and gradually submit the plan on the others if the one on the Tiguan gets approval from the local authorities, according to the ministry. 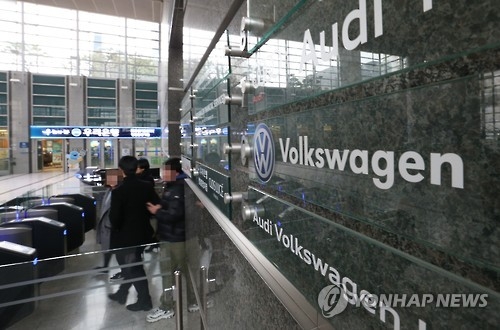