SEOUL, Oct. 6 (Yonhap) -- Despite its much-hyped opening, only a trickle of visitors use South Korea's sole foreigners-only off-track betting parlor in Seoul, casting a cloud over its financial soundness, a lawmaker said Thursday.

In June this year, horse racing track operator LetsRun Corporation opened the off-track betting parlor in the Sheraton Grand Walkerhill Hotel in the southeastern part of the capital, in a bid to attract foreign horse racing fans.

In a report based on data from the track operator, Rep. Kim Tae-heum of the ruling Saenuri Party said a cumulative 1,078 foreigners have visited since its opening. That translates into an average 28 people per business day and hovers far below its capacity of 88 people. The parlor is manned by 72 ticket agents -- four regular employees and 68 part-time workers.

The company has also spent 2.3 billion won (US$2.1 million) on building the facility, with the annual personnel cost estimated at 730 million won.

But the lawmaker pointed out that four months after its opening, the operator is stuck in a difficult situation where it has to find ways to keep the parlor afloat.

"The off-track parlor for foreigners has yet to hit its stride," Rep. Kim said. "The corporation should actively come up with ways to attract foreign tourists to help the facility take root." 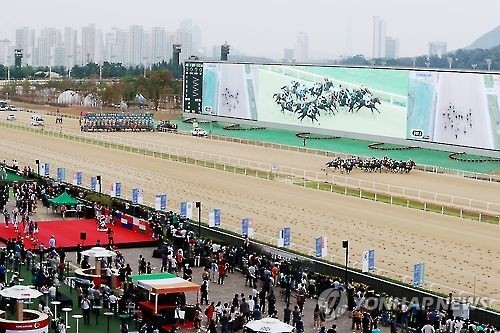