Despite his doctor's advice to rest a little longer, the ruling party chief pushed ahead with his trip to offer his encouragement to residents in Ulsan, Busan, Yangsan and Jeju Island that have been reeling from the aftermath of Typhoon Chaba that struck the region a day earlier. He ended his hunger strike on Sunday.

His trip began with a visit to the Daejeon National Cemetery to pay his respects to the three Navy officers who died after their Lynx helicopter crashed into waters off the country's east coast last month during military drills between South Korea and the United States.

In the guestbook at the cemetery, Lee wrote, "To uphold the noble spirits of you who have dedicated to safeguarding the Republic of Korea and its people, I and the Saenuri Party will renew ourselves."

Later in the day, Lee plans to travel first to Ulsan, the hardest-hit city, and then to Busan and Yangsan. The next day, Lee will visit the affected areas on the southern resort island of Jeju.

According to the Ministry of Public Safety and Security, the typhoon has left seven people dead and three others missing as of 1 p.m. Thursday.

Before returning to Seoul, the Saenuri chief plans to visit his constituency in Suncheon, South Jeolla Province, to meet with his supporters and take a brief rest, his aides said. 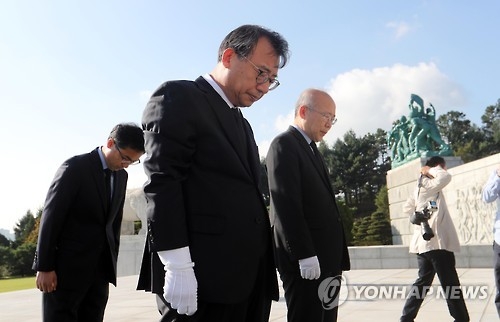