SEJONG, Oct. 6 (Yonhap) -- Exports of South Korea-made instant noodles, or ramyon, are expected to hit a record high in 2016 on the back of rising popularity in China, customs data showed Thursday.

The total value of ramyon exports stood at US$175 million in the first eight months of the year, up 26.5 percent from a year earlier, according to the data compiled by the Korea Customs Service.

Imports of foreign-made ramyon were $1.17 million over the eight-month period, with $1.46 million worth of imported noodles hitting South Korean shelves last year.

Exports to China rose 11.4 percent on-year to $38.8 million last year, accounting for 17.7 percent of the total outbound shipments. Demand from the United State was valued at $29.6 million, followed Japan with $18.6 million and Hong Kong with $13.6 million. 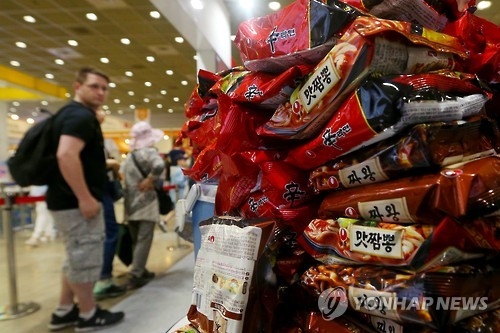