SEOUL, Oct. 6 (Yonhap) -- State prosecutors on Thursday began an investigation into National Assembly Speaker Chung Sye-kyun after ruling party lawmakers filed a petition against him over the latest parliamentary passage of a motion to dismiss the country's agricultural minister.

Late last month, all of the lawmakers at the Saenuri Party, including its chief Lee Jung-hyun and floor leader Chung Jin-suk, jointly lodged a complaint with the Seoul Central District Prosecutors' Office.

The legal action came a few days after the National Assembly endorsed the motion to recommend the dismissal of Minister Kim Jae-soo to President Park Geun-hye over his alleged ethical lapses. Park's ruling party boycotted the vote and walked out of a plenary session of the parliament.

The petitioners said the parliament speaker Chung abused his power with unilateral action that favored the opposition parties and obstructed ruling party lawmakers from exercising their rights.

Under parliamentary rules the speaker, who is originally from the main opposition Minjoo Party of Korea, is required to maintain neutrality in the exercise of his duties.

Chung, however, flatly denies the allegations, saying he followed the Constitution and the National Assembly Act.

Prosecutors said they will review the petition and decide when and how to investigate the ruling party officials and the parliament speaker.

Kim Jae-soo, who took office in September as the agricultural minister, has been under intense fire from opposition parties over "suspicious" real estate trading, along with a loan from a bank at an unusually low rate. 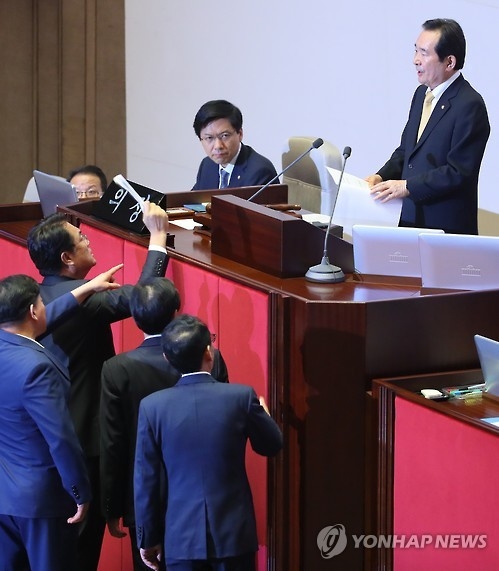