SEOUL, Oct. 6 (Yonhap) -- Calls for "surgical strikes" against North Korean nuclear facilities have gained ground recently along with calls for more stringent sanctions, despite many observers expressing skepticism that neither South Korea and the United States have the political will to pursue such a military option.

The close allies have both recently floated the idea of a pre-emptive surgical strike on the North's nuclear facilities after the communist regime conducted its fifth and most powerful nuclear test on Sept. 9.

Seoul's defense ministry said Thursday the two allies will "have a consultation over a possible pre-emptive strike against North Korea depending on situations in case of an imminent nuclear attack by the North."

In Washington, officials have revisited the surgical strike option which was considered against North Korea's Yeongbyeon nuclear facilities under the Bill Clinton administration in 1994. That's because the North has continued to improve its nuclear and missile capabilities despite international sanctions and condemnation. "A president should take action to defend the U.S. against imminent threat. Exactly what action you have to determine -- what your intelligence was, how certain you were of that intelligence -- but you would have to take action," Kaine said during a presidential television debate.

Asked if President Barack Obama has any particular plans for North Korea such as airstrikes, White House press secretary Josh Earnest said in a briefing late last month, "Just in general, not specifically to North Korea, as an operational matter we're not going to discuss any pre-emptive military actions in advance."

The remark does not appear to suggest any military action is under consideration against the North, but the question itself shows heightened concern in the U.S. about the North's nuclear and missile programs in the wake of the fifth test.

Security experts said Seoul and Washington share the understanding that they have to stop North Korea before it achieves the capabilities of putting a miniaturized warhead on an intercontinental ballistic missile (ICBM) or a submarine-launched ballistic missile (SLBM).

For a surgical strike on North Korea, it requires the allies' military capabilities, legal suitability, analysis on environmental impact and a consensus from neighboring countries. Among others, it demands a resolution by the U.N. Security Council to take such action, they said.

Still, experts warned a pre-emptive strike on North Korea could trigger a full-scale war on the Korean Peninsula, which could result in huge casualties and damages.

"Nuclear weapons (held by the U.S.) need to be used as deterrent or strategic tool against North Korea's growing nuclear ambitions, rather than being used as a real weapon," Kim Dong-yub who teaches North Korean military at Kyungnam University said. 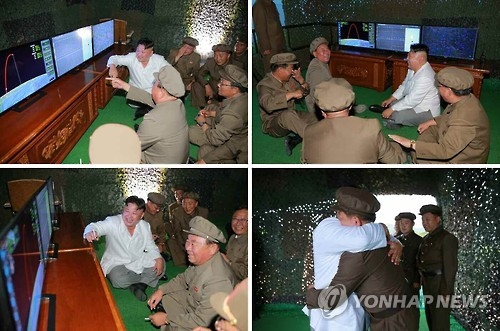 In an interview with "CBS This Morning" in April, Obama also said, "We could, obviously, destroy North Korea with our arsenals. But aside from the humanitarian costs of that, they are right next door to our vital ally, Republic of Korea."

He said the U.S. is spending a lot more time positioning its missile defense systems and other shields in South Korea as part of efforts to resolve the underlying problem of nuclear development inside of North Korea.

In response, North Korea said Wednesday in the state-run Rodong Sinmun, "If the aggressors dare mount a preemptive attack on the DPRK, they will face a merciless, nuclear retaliatory strike of justice." The DPRK is the acronym for the North’s official name, the Democratic People’s Republic of Korea.

"The DPRK will steadily shore up its nuclear deterrent in quality and quantity to fundamentally defuse the danger of a nuclear war created by the U.S.," it said.

In the past decade, Pyongyang has escalated its saber-rattling by conducting five underground nuke tests, two of which were carried out this year. Besides these test it fired off a series of ballistic missile.

The rogue state is widely expected to carry out its sixth nuke test or launch a long-range missile this month as it celebrates the 10th anniversary on Sunday of its first nuclear detonation in 2006.