SEOUL, Oct. 6 (Yonhap) -- Doosan Bobcat Inc., a unit of power and construction equipment conglomerate Doosan, will expand its presence in emerging markets as the company is set to make a market debut here later this month, a company executive said Thursday.

In August, the company received preliminary approval for its initial public offering (IPO) planned on Oct. 21.

"With the planned IPO, we will seek to emerge as a global player by creating new demand in Europe and emerging markets," Kim Jong-seon, an executive director at Doosan Bobcat, said in a meeting with reporters.

"Investors will be given an opportunity to invest in Doosan Bobcat," he said.

Doosan Infracore Co. and Doosan Engine Co. own a majority 78.4-percent stake in Doosan Bobcat, which operates 31 subsidiaries in 20 countries. Doosan Bobcat is a leading player in the small construction machinery sector in the United States.

It would become the country's second-biggest market debut since Samsung Life Insurance Co.'s 4.89 trillion won in 2010.

The IPO plan is part of Doosan Group's efforts to improve its financial status. The power-to-construction equipment conglomerate has raised trillions of won by selling assets in recent years to survive a prolonged slump in the construction industry.

Doosan Group hopes its debt will be reduced to 8 trillion won from the 11 trillion won recorded at the end of last year with the proceeds from the IPO. 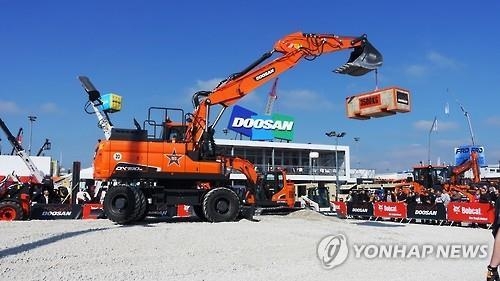