SEOUL, Oct. 6 (Yonhap) -- The Korean Cultural Center in Japan will celebrate the 570th anniversary of the promulgation of the Korean alphabet, or "hangeul," with a special exhibition this month, a local museum said Thursday.

"The much-anticipated exhibition, the first of its kind overseas, will showcase reproduced copies of Hunminjeongeum Haerye as well as video clips and various modern artworks depicting hangeul-based themes," the National Hangeul Museum said. It said the exhibit will run from Friday through Oct. 28.

Hunminjeongeum Haerye is a commentary of the Korean alphabet, previously called Hunminjeongeum, which gives detailed explanations and examples of each letter.

The museum said the planned exhibition will consist of two parts, with the first half dedicated to presenting the characteristics of hangeul in the simplest way possible for Japanese visitors to understand.

Japanese scholar and linguist Hideki Noma, who lauded hangeul as a kind of "cultural revolution," will take the spotlight and explain the birth of the writing system, the differences between Korean and Japanese characters and the characteristics of the Korean writing system with the aid of visual materials.

In the latter part of the exhibit, visitors can enjoy various works of art by 23 modern artists who have reinterpreted hangeul in their own ways.

"In addition to the special exhibition, the cultural center will also offer lectures for non-Korean-speaking visitors to have a better understanding of hangeul," the event's organizer added.

Considered one of the simplest and most logical writing systems in the world, hangeul was invented by King Sejong of the Joseon Dynasty (1392-1910) and his scholars in 1443 and promulgated three years later. 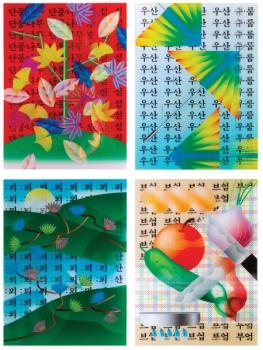