It said some 5,500 soldiers have been sent to such cities as Busan, Ulsan and Gyeongju that have been affected by the typhoon on Wednesday to help out with ongoing restoration work, the Army said in a statement.

"We will mobilize our troops to the extent that it won't affect their basic duties," an army spokesman said.

The soldiers are mainly helping typhoon victims clean their furniture and other belongings, collect floating wastes and remove earth and sand from streets, the statement said. 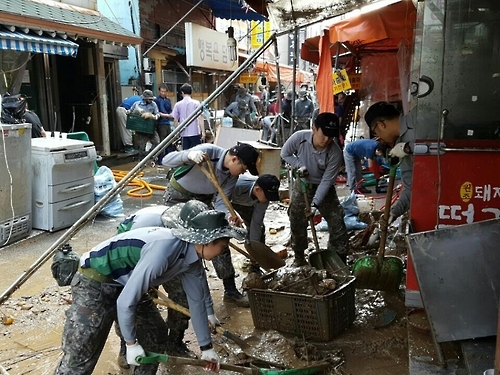 Nearly 229,000 households in the typhoon-hit region experienced a temporary blackout although almost all were restored by Thursday morning. At least seven people were killed in the disaster as of 1 p.m., according to the Ministry of Public Safety and Security.

The typhoon also damaged crops at some 7,500 hectares of farmland and inundated 508 houses along with another thousand vehicles. Almost 200 people from 90 households have been evacuated from their homes due to flooding. Some domestic and international sea routes are still restricted, it said.