SEOUL, Oct. 6 (Yonhap) -- South Korea's military said Thursday the planned acquisition of a site for the deployment of an advanced anti-missile system does not require parliamentary approval.

"The planned installation of the Terminal High Altitude Area Defense (THAAD) system (in the southeastern county of Seongju) will be carried out under the existing Status of Forces Agreement (SOFA) signed between Seoul and Washington and already approved by the National Assembly," an official at the Ministry of National Defense told Yonhap News Agency.

"So no additional approval is required to push forward the deployment," he said.

The ministry's response comes after Rep. Woo Sang-ho, the floor leader of the main opposition Minjoo Party of Korea, called on the government earlier in the day to let the National Assembly review the plan which could cost around 100 billion won (about US$90 million) of taxpayer money.

Defense ministry spokesman Moon Sang-gyun said the acquisition process will kick off soon. The Lotte Group, a retail conglomerate, owns the golf course selected as the final site for the deployment of a THAAD battery in northern Seongju, about 290 kilometers southeast of Seoul, by the end of next year. 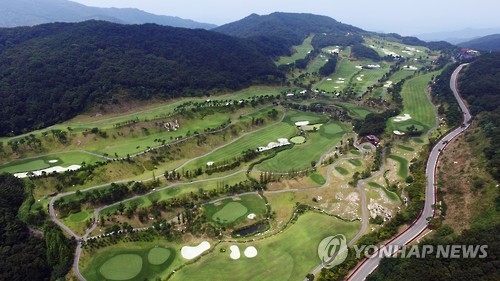 On Sept. 30, South Korea selected the Lotte Skyhill Country Club as the most optimal site for the THAAD deployment. It beat two other candidate sites both in Seongju -- Mt. Yeomsok in Geumsoo and Mt. Kkachi in Sooryoon -- in six criteria that include operational effectiveness, infrastructure, construction time and cost.

But Gimcheon city residents living near the golf course expressed strong opposition to the decision fearing health problems that the powerful radar system may pose. The government has repeatedly made clear that the AN/TPY-2 radar poses no health issues.

Following the decision, the ministry plans to acquire the golf club from Lotte, and will have further consultations with the U.S. to complete the deployment within the targeted time frame.

"The government is determined to finish the THAAD deployment by December next year without fail to better protect the security of the country and life of its people from the evolving nuclear and missile threats from North Korea," the ministry said.