SEOUL, Oct. 6 (Yonhap) -- A royal procession will be reenacted this weekend from a palace in Seoul to a fortress in the neighboring city of Suwon to celebrate an annual cultural festival, the Seoul city government said Thursday.

The Seoul Metropolitan Government said it will reenact King Jeongjo's parade to a royal tomb where his father is buried in Hwaseong Fortress in Suwon, located some 50 kilometers south of Seoul. The procession will mark the 53rd Suwon Hwaseong Cultural Festival.

The UNESCO-designated cultural heritage site was built by the 22nd monarch of the Joseon Dynasty (1392-1910).

In 1795, King Jeongjo embarked on an eight-day trip to Suwon Hwaseong for a pilgrimage to his father to celebrate the 20th anniversary of his reign and the 60th birthday of his mother. It was one of many deeds that he did to show his filial affection towards his late father.

Under the city government's plan, the organizers will re-enact the royal procession on a route that spans a total of 45 km from Changdeok Palace to the fortress.

The reenactments of the procession have so far only taken place along the route in Gyeonggi Province and have not started in the capital city.

A total of 1,239 people and 168 horses are planned to be mobilized for the event in Seoul alone. The role of King Jeongjo and other major figures have been chosen through a public contest. 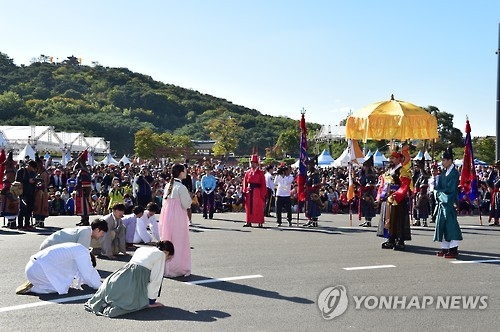