SEOSAN, South Korea, Oct. 7 (Yonhap) -- An annual historical festival opened in the western city of Seosan Friday, offering a host of traditional activities inside the walls of a well preserved fortress.

The Seosan Haemieupseong Festival, named after the city and the fortified town located some 150 kilometers south of Seoul, has been held almost every year since 2000 to promote the history and culture of the Joseon Dynasty (1392-1910). The town had served as a logistical and cultural hub due to its central location and proximity to China. For similar reasons, it also came under frequent attacks in times of conflict. 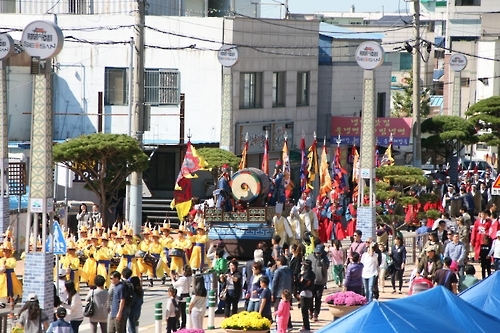 This year, the 15th edition of the festival will run for three days in and around the Haemieupseong Fortress, which was built during the reigns of Kings Taejong and Sejong some 600 years ago to defend the region from Japanese invaders. As one of the country's best preserved fortresses, Haemieupseong is also famous as a former workplace of the revered Admiral Yi Sun-shin and the then commander-in-chief of Chungcheong Province.

Pope Francis visited the fortress during a visit to the country in August 2014 to honor the nearly 1,000 Roman Catholics who were martyred on its grounds in 1866.

To launch the event, an ancestral rite was held inside the fortress to wish for the festival's success. Following an opening ceremony, a variety of traditional performances and hands-on activities will be held at different sites across the fortress' grounds, including tightrope walking, folk music performances, traditional craftsmaking and reenactments of Joseon era military parades. City tours have also been organized for those wishing to see more of Seosan.

A highlight of the event will be a fashion show by last year's Miss Global Beauty Queen contestants. Representing some 80 countries worldwide, the women will wear their traditional costumes during the gala show Saturday and serve as honorary ambassadors throughout the festival.

Some 200,000 people have visited the event each year, according to the organizers that operate a website (www.haemifest.com) to provide useful information on the event.

Visitors from Seoul can reach Seosan in less than two hours by express bus. 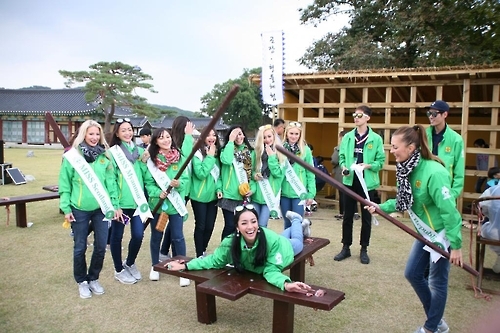