Tottenham Hotspur attacker Son Heung-min scored the winner at Suwon World Cup Stadium in Suwon, some 46 kilometers south of Seoul, leading South Korea to their second victory in the final Asian qualifying round for the 2018 FIFA World Cup.

Both South Korea and Qatar are in Group A along with Iran, Uzbekistan, Syria and China in the final round. South Korea had a 3-2 win against China and played to a scoreless draw with Syria last month.

Qatar, previously defeated by Iran and Uzbekistan, remain winless in the group.

The top two teams from the group will earn automatic berths at the World Cup. The third-place team will have to go through playoff rounds to book their tickets to Russia.

The Taeguk Warriors, looking for their ninth consecutive World Cup appearance, will next face Iran in Tehran Tuesday.

South Korea went on the board in the 11th minute after captain Ki Sung-yueng blasted a right-footed strike from outside the box. The Swansea City midfielder almost doubled the lead just three minutes later, but this time his shot was saved by goalkeeper Saad Al Sheeb.

The momentum, however, didn't last long, as Qatar leveled the score in the 16th. After Soria was brought down by Hong Jeong-ho in the box, Al Haydos converted the spot kick to make it 1-1.

South Korea tried to go ahead with Ji's strike in the 31st and Suk's header a minute later, but both of their efforts failed to beat Al Sheeb.

Just before halftime, the visitors silenced partisan fans in the stands after Soria poked the ball off Al Haydos' pass and beat goalkeeper Kim Seung-gyu.

South Korea, however, swayed the match in their favor in the second half.

In the 56th, Kim Shin-wook, who replaced Suk at halftime, headed down the cross from the left side, and it landed on Ji's feet after Bualem Khoukhi's poor clearance. Ji then slotted the ball into the net with his right foot for the equalizer.

Two minutes later, Son rocked 32,550 fans at the stadium with his trademark move. The former Bayer Leverkusen man cut inside past defenders from the left wing and curled a shot with his right foot to give South Korea a 3-2 lead.

South Korea went down a man after Hong received his second yellow card and was sent off after fouling Soria in the 66th. The Uruguay-born Qatari striker then launched a powerful header from a free kick a minute later, only to be denied by Kim Seung-gyu.

To fill Hong's void in the center defense, South Korea made their second substitution with Kwak Tae-hwi replacing midfielder Koo Ja-cheol in the 71st.

With the man advantage, Qatar kept knocking on the doors, but both Luiz Junior's effort in the 82nd and Tabata's attempt in the 85th missed the target.

South Korea then substituted Son in the 88th and put former Cardiff City player Kim Bo-kyung to strengthen the midfield.

Qatar were given four minutes of stoppage time, but they failed to pull off an equalizer. 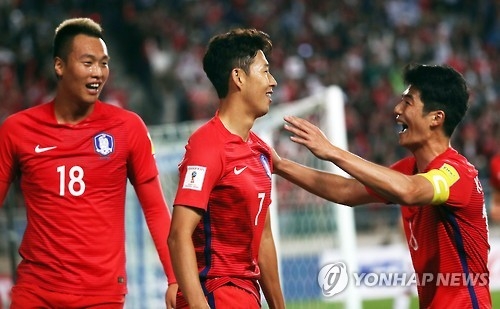