Son entered the contest at Suwon World Cup Stadium in Suwon, 40 kilometers south of Seoul, as one of the hottest players anywhere. He has netted five goals in six matches for the Spurs in Premier League and Champions League action.

The 24-year-old saved the country from the brink of an embarrassing draw against the underdogs. After captain Ki Sung-yueng opened the scoring just 11 minutes in, South Korea let Qatar equalize just five minutes later and then move ahead late in the first half.

The hosts predictably came out firing in the second half, and FC Augsburg forward Ji Dong-won leveled the score in the 56th minute. Son played the savior two minutes later, converting a fine pass by Ki on the left side of the box.

Son's deft shot was as impressive as Ki's feed. Son got behind the defense to receive the pass and never hesitated as he curled it past Saad Al Sheeb in the Qatari net.

Son has made a remarkable turnaround this season after struggling to make the transition from the Bundelisga a year ago. With four goals in the league, Son has already matched his total from 28 matches last season. He demanded a transfer just after the disappointing Olympic campaign in August, hoping to find a club that would give him more playing opportunities.

Coach Mauricio Pochettino convinced him to stay and said Son would be in the club's future. And with injuries mounting on the offense, Son had his chance to shine. He has made the most of it so far. 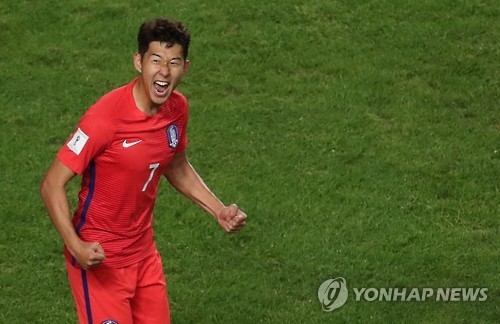 And not all was well on the national team front, either. When announcing the 23-man roster on Sept. 26, South Korea coach Uli Stielike criticized Son for his "problematic" behavior -- the player had kicked at a water bottle when he was taken out late in the first qualifying match versus China -- and said, for all his scoring heroics, Son would have to get his act together.

Stielike had never singled out any player before, and it hinted at the coach's deep frustration with the emotional player.

To his credit, Son admitted earlier this week he was clearly in the wrong, and Stielike only said what had to be said.

Son needed to let his playing do the talking, and he made it happen with his one second-half chance.

With South Korea nursing a 3-2 lead, Stielike replaced Son with midfielder Kim Bo-kyung to shore up the middle. And on this night, there was no kicking at anything other than the ball for Son.