South Korea edged out Qatar 3-2, thanks to the winner from Tottenham Hotspur attacker Son Heung-min. They now have two wins and one draw in the final Asian qualifying round for the 2018 FIFA World Cup.

South Korea will next face Iran on the road for their fourth match in Group A. The Taeguk Warriors have never collected a victory in Tehran.

Against Qatar, South Korea trailed 2-1 at half at Suwon World Cup Stadium in Suwon, some 46 kilometers south of Seoul. However, Ji Dong-won and Son managed to score goals early in the second half to save the hosts from the defeat.

"This is the first time in two years that we've come back to win," Stielike said after match. "This is the victory that is very important for us because it gave us confidence before going to Iran."

South Korea had a difficult time even with a 3-2 lead. They were down to 10 men after center back Hong Jeong-ho received his second yellow card in the 66th minute. Stielike said the players did a great job of overcoming the disadvantage and the lack of stamina in the end.

"Playing with 10 men for 30 minutes is not easy in this kind of level," he said. "We know that the matches in the final round are not easy at all."

Although giving up two goals to the underdogs at home can be a cause for concern, Stielike emphasized that the players performed well, taking control of the match and keeping their composure during play.

"We came back from behind with a direct and aggressive play and had difficulties after Hong was sent off," he said. "But overall, I'm satisfied with our performance because we used both sides of the flanks and switched attacking directions very well."

Qatar head coach Jorge Fossati said it was unfortunate that they blew up a 2-1 first-half lead.

"Just like I said yesterday, it was a very tough game for both sides for 90 minutes," he said. "In the first half, we confronted them very well with counterattack."

Fossati, who took charge of the national team just 12 days ago, said that his players were worried about keeping the lead in the second half. The Uruguayan also lamented his players' mistakes in the opening 15 minutes of the second half.

"If you commit this kind of mistake, they know how to punish you," he said. "Especially the second goal for South Korea, we made a big mistake."

Fossati, however, said he is proud of the players' performance against South Korea. Qatar will next face Syria in Doha on Tuesday.

"I'm proud of my players and my team because they confronted one of the top four teams in Asia face-to-face," he said. "I'm very optimistic about the qualification." 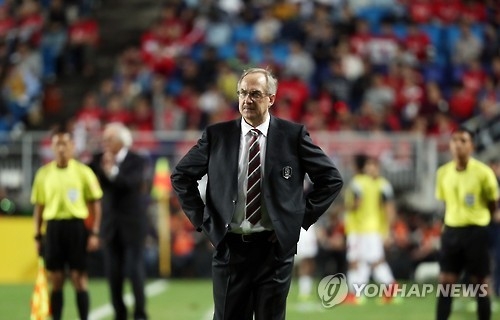