WASHINGTON, Oct. 6 (Yonhap) -- Seven out of 10 Americans support the U.S. troop presence in South Korea, an all-time high that shows they don't buy Donald Trump's argument that the U.S. should pull out of the Asian ally unless it pays more for the troops, according to an annual survey released Thursday.

The Chicago Council on Global Affairs survey of 2,061 people showed that 70 percent support keeping military bases in South Korea, up from last year's 64 percent. Support among Trump backers was even higher at 72 percent, according to the poll.

"Donald Trump has repeatedly included South Korea in a group of what he considers free-riding allies, unwilling to contribute more to their own defense. That criticism, however, has done little to dampen Americans' support for the U.S.-Korea alliance," the council said in a report.

Support for keeping troops in South Korea was higher than in the cases for other allies. Only 46 percent of the respondents were in favor of having a presence in Australia, 61 percent in Germany and 60 percent in Japan, according to the survey.

By party, 76 percent of Republicans, 70 percent of Democrats and 64 percent of independents expressed support for troop presence in the South, the council said, adding that one reason for the increased support is the "growing perception of North Korea as a critical threat to the U.S."

The survey was conducted from June 10-27, and had margins of error of plus or minus 2.2-3.5 percentage points. 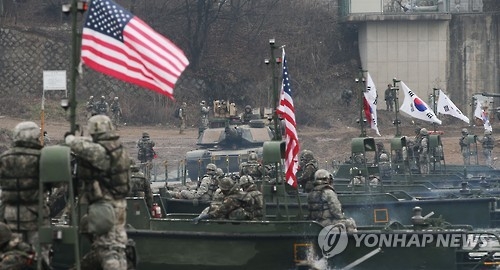 About 28,500 American troops are stationed in South Korea to help deter North Korea. Seoul pays about half the costs, about US$900 million a year, to help finance the troop presence, and U.S. officials, including Gen. Brooks, said it would cost more to keep those troops stationed in the U.S. than it does in Korea.

But Trump has long expressed deeply negative views of such security commitments, seeing them as a cumbersome burden sucking up taxpayer dollars. The real-estate tycoon has claimed that allies should pay more, or the U.S. should be prepared to end their protection.

"While the American public at large may not be aware of the details of these contributions (from South Korea), three quarters (72 percent) of Americans say that US relations with South Korea are either staying about the same (58 percent) or improving (14 percent)," the council said.

The survey also showed that 60 percent think the North's nuclear program is a critical threat to the U.S., up 5 percentage points from last year. The North represented the third-highest threat after international terrorism (75 percent) and the possibility of unfriendly countries becoming a nuclear power (61 percent).

Among those who cite the North's nuclear program as a threat, 75 percent support long-term bases in the South.

As to how to resolve the North Korean nuclear issue, 81 percent expressed support for continuing diplomatic efforts to get the North to suspend its nuclear program. Eighty percent also support imposing sanctions and 53 percent support conducting cyberattacks on the communist nation, the survey showed.

The North was also the least favored country.

On a scale of 0 to 100, with 100 representing the highest possible favorability, the North had 19 points, being the only country among a dozen nations listed in the poll to fall below 20. The second-least favored nation was Iran with 26 points.

In contrast, the favorability of South Korea remains at its highest recorded value at 55 points.