WASHINGTON, Oct. 6 (Yonhap) -- U.S. Republican presidential candidate Donald Trump has accused South Korea of "laughing at how stupid we are," as he renewed the wrong-headed claims that the free trade pact with the Asian ally ended up hurting the U.S.

Trump has long blamed free trade deals as a key cause of American economic problems in an attempt to rally support from voters struggling with economic woes and criticize his Democratic rival, Hillary Clinton, for backing such agreements. He has denounced the pact with Korea as a "job killing" deal and a "disaster."

"Hillary's Korea deal, South Korea, cost us another 100,000 jobs. Remember that? It was supposed to be a good deal. It cost us jobs, tremendous numbers of jobs. And South Korea, like almost every other country, is laughing at how stupid we are," Trump said at a campaign rally in Nevada on Wednesday.

In another campaign speech later in the day, Trump again blasted the pact.

"Hillary's career deal, the deal she made for South Korea, cost us 100,000 jobs and it was supposed to be a positive. And we all knew that it's never a positive," Trump said. 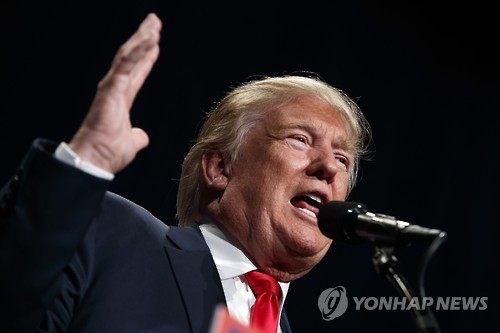 The painstakingly negotiated Korea-U.S. FTA has been in effect since 2012 and has widely been considered a symbol of the economic alliance between the two countries. Attempts to revise or renegotiate the agreement could set off diplomatic tensions.

The U.S. International Trade Commission (ITC) said in a report in late June that the Korea deal has been good for American interests, saying the agreement is estimated to have improved bilateral merchandise trade balances by $15.8 billion last year.