SEOUL, Oct. 7 (Yonhap) -- South Korea have climbed to second place in their group in the Asian qualifying for the 2018 FIFA World Cup.

With three matches in the books for all six teams in Group A in the final Asian qualification round, South Korea find themselves in second place behind Iran.

Both Iran and South Korea have seven points with two wins and a draw, but Iran are ahead in goal difference, plus-3 to plus-2. There were in second and third prior to Thursday's matches.

Uzbekistan fell from first to third with two wins and a loss.

The top two teams from each of two groups in the current stage earn automatic berths to the World Cup in Russia. Third-place teams will enter playoffs for their final chance for a spot. 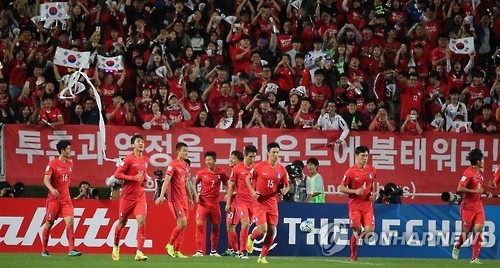