SEOUL, Oct. 7 (Yonhap) -- The use of belligerent rhetoric by North Korea's state media hit a three-year high this year as the North heightened its nuclear and missile provocations, a Pyongyang monitoring website showed Friday.

North Korea's threat index came in at 0.4 as of Thursday, which means reports containing aggressive words accounted for 40 percent of all North Korean media reportings, according to KCNA Watcher, which monitors North Korea's official media reports.

North Korea's state media outlets increased uses of provocative and aggressive language including a threat to "turn South Korea into a sea of flame" when inter-Korean tensions flared up. 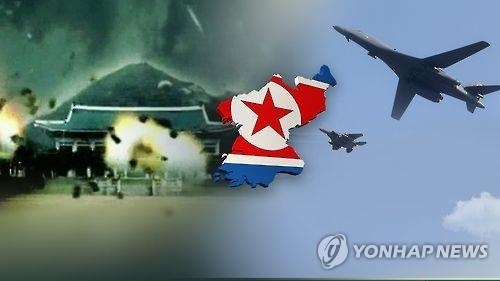 So far this year, North Korea has conducted nuclear tests twice and launched more than 20 ballistic missiles in defiance of international condemnation.

In March, North Korea's Central News Agency said that Pyongyang is ready to turn President Park Geun-hye and her office into "a sea of flames and ashes," with its large-caliber multiple launch rocket system.

A rise in the threat index in the past did not necessarily match signs of North Korea's physical attacks, but experts said risks of Pyongyang's military provocations are high this year.

The index reached a 14-year high of 0.4 in 2013 when North Korea conducted its third nuclear test and threatened to target South Korea and the U.S. mainland with its missiles. But there was no physical aggression by the North.

This year, North Korea is accelerating its push for developing its nuclear and missile programs. It claimed it has mastered the technology to make a nuclear warhead small enough to be mounted on a ballistic missile.

North Korea is seeking to develop a nuclear-tipped intercontinental ballistic missile that can fly as far as the U.S. mainland.