In September, 16,778 new imported cars were registered, according to the data from the Korea Automobile Importers and Distributors Association. 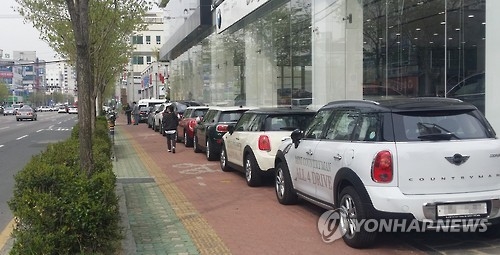 Such a sharp drop in September was again attributed to the sales ban on vehicle models sold by Audi Volkswagen Korea, the local importer of the two German vehicle brands, for fabricating the cars' emissions and fuel efficiency test results when acquiring their sales license here.

Sales of Audi cars plunged 85.1 percent on-year to 506 last month from 3,401 a year earlier, while sales of Volkswagen vehicles also tumbled 93.7 percent to 184 from 2,901 over the cited period, according to the data.

Most other brands continued to see their sales jump in line with a recent expansion of the local import vehicle market, which increased over 24 percent on-year in 2015 alone.

Sales of Mercedes-Benz cars spiked 17.5 percent on-year to 5,087 in September, making them the No. 1 import brand in the local market.

BMW maintained its No. 2 spot with 3,031 vehicles registered here last month, but the figure marked a 13.5-percent on-year drop.

Land Rover had its sales jump more than five-fold from 180 to 957 over the cited period, while Toyota enjoyed a 28.8-percent increase to 742 cars.

In the first nine months of the year, the number of newly registered import vehicles came to 165,189, down 7.8 percent from the same period last year.