INCHEON, Oct. 7 (Yonhap) -- South Korea football coach Uli Stielike said Friday his players will have to overcome an intimidating fan atmosphere in Tehran when they face Iran in the upcoming World Cup qualifier.

The men's football team departed for Iran to play their fourth match Tuesday at Azadi Stadium in the final Asian qualifying round for the 2018 FIFA World Cup.

"Iranian fans' avid support can put pressure on visitors," Stielike said at Incheon International Airport. "But it's an important match because lots of things are at stake."

South Korea, looking for their ninth consecutive World Cup appearance, are currently second in Group A where they are paired with Iran, Uzbekistan, Syria, China and Qatar. Both Iran and South Korea have seven points with two wins and a draw, but Iran are ahead in goal difference, plus-3 to plus-2.

The victory at Tehran will put South Korea in first place. However, the Taeguk Warriors have never won at Azadi Stadium, posting only two draws and fours losses.

Stielike's side also suffered a 1-0 defeat there two years ago in a friendly match.

"Now, we're in the final World Cup qualification round and it will be different from playing a friendly match," he said, adding that the stadium's high altitude -- located 1,200 meters above sea level -- will not be a big concern.

South Korea will travel to Tehran without center back Hong Jeong-ho after he was sent off on two yellow cards in South Korea's 3-2 victory over Qatar Thursday. Stielike selected Kim Min-hyeok of Japanese club Sagan Tosu to fill the void. Although there is a change in defense ahead of the tough away match, the German coach said they will not curb their style of play.

"We focus on attack and this means we can be vulnerable against counterattacks," he said. "However, we're not going to change our style of play and philosophy, although we do need to carefully boost our defense."

Stielike urged South Korean fans to show support. Although they beat Qatar in a come-from-behind fashion, some fans were not satisfied with the team's performance in the qualifying round. Before Qatar, South Korea had a 3-2 win against China at home -- nearly blowing a 3-0 lead -- and played to a scoreless draw with Syria.

"I know there are still big concerns and criticism against our team," he said. "I'm a little bit concerned about our future performance in a situation where we're not getting big support from fans despite collecting a victory with 10 men." 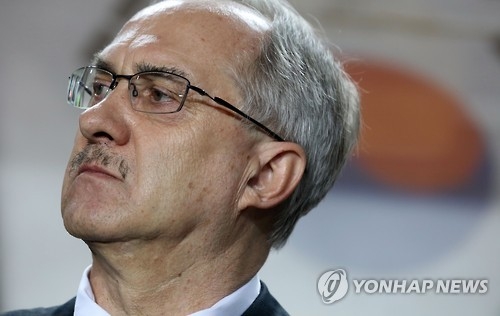