Yim Jong-yong, chairman of the Financial Services Commission (FSC), admitted that banks here are subject to some "excessive" rules including those on loan loss reserves.

"(The government) will lay the groundwork for domestic banks to raise their investment appeal and compete in the global market by eliminating factors causing an excessive burden for capital increase and worsening profitability," he said in a meeting with bank officials.

In a concrete step, the government has decided to regard loan loss reserves as part of their common capital stock.

Currently, the funds or other financial assets set aside to cover estimated potential losses from late loan payments or defaults are deducted from capital stock.

The rule has been a burden on local banks as they are required to meet the strict capital adequacy ratio standards of the Bank for International Settlements (BIS) amid the country's restructuring of the shipping and shipbuilding industries.

Once the regulation on loan loss reserves is eased, the FSC said, the total capital ratio of the banks will rise by an average of 0.6 percentage point by the standard of data available at end-March this year. 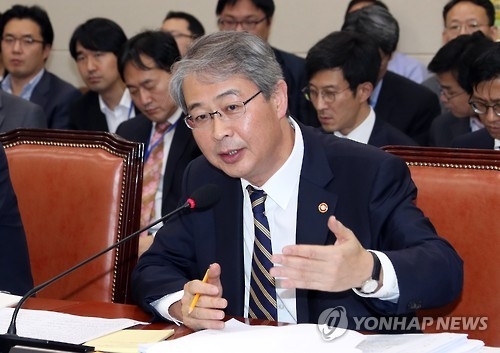 The government also plans to push for the revision of legislation on earned surplus reserves, it added.

The nation's law on banking services calls on banks to set aside more profit reserves than the amount required by the commercial law.

The government will try to amend the law on banking services to put the amount on the par with that of the commercial law, according to the FSC.