SEJONG, Oct. 9 (Yonhap) -- The South Korean economy has been recovering at a feeble pace in recent months, hindered by faltering exports and sluggish industrial output despite a rise in private consumption, a state-run think tank said Sunday.

Consumption and facility investment have played an important role in propping up Asia's fourth-largest economy for nearly a year, counterbalancing slumping exports which have posted negative growth 20 times out of 21 months since January 2015. 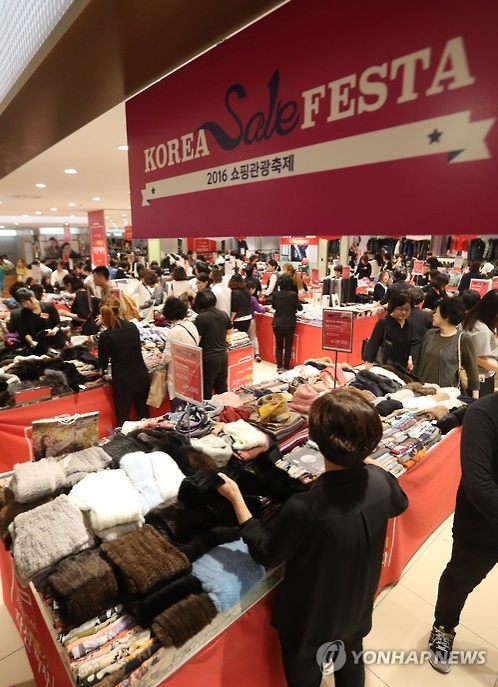 The KDI report said retail sales jumped 6 percent in August from a year earlier, expanding from a 4.4-percent, on-year gain in July, on a sharp rise in demand for home appliances and foodstuffs amid the sweltering heat in the summer and the Chuseok holiday in September.

Construction investment has maintained "favorable momentum" to grow 54.6 percent in construction orders received in August, while facility investment advanced 3.6 percent on-year on the back of a turnaround in equipment investment.

"However, ailing exports have stalled improvements in manufacturing production and employment, discouraging the spread of recovery throughout the overall economy," noted the think tank. "Exports declined further on the global economic slowdown coupled with temporary factors such as strikes at automakers."

South Korea's exports fell 5.9 percent from a year earlier in September, backtracking from a 2.6-percent gain the previous month, while the current account surplus hit the lowest in four months in August.

The manufacturing capacity utilization, closely linked with exports, plunged to 70.4 percent in August from 73.8 percent in the previous month.

The KDI said partial walkouts at major carmakers, including industry leader Hyundai Motor Co., and the worldwide recall of the Galaxy Note 7 weighed heavily on industrial output and outbound shipments.