SEOUL, Oct. 7 (Yonhap) -- The United States' Ambassador to the United Nations Samantha Power will reaffirm America's firm defense commitment to South Korea during her visit to the Northeast Asian country this week, the U.S. Embassy in Seoul said Friday.

Power will fly arrive Seoul from Japan on Saturday on the second leg of her two-nation visit slated from Thursday to Tuesday, a rare trip as a U.N. envoy to the allied countries.

During her latest tour, Power will "reaffirm the U.S.' ironclad commitment to the security of both allies," the embassy said in a statement. She will also meet with North Korean defectors over human rights issues, and examine a range of bilateral, regional and global issues in meeting with senior government officials in Tokyo and Seoul, according to the embassy.

High on the agenda throughout her trip will be "the ongoing efforts to respond effectively to the serious threats to security and stability in the region posed by North Korea's nuclear and missile programs," the diplomatic mission said.

In Seoul, the ambassador will meet with defectors from North Korea to highlight the communist regime's chronic human rights violations, it also added.

On Sunday, Power is scheduled to travel to Panmunjeom, the inter-Korean truce village where South and North Korean forces stand facing off against each other. On the occasion, the ambassador plans to issue a message of warning against North Korea's nuclear and missile programs.

On Monday, she will hold consultations with Foreign Minister Yun Byung-se and other senior security officials including those from the presidential house Cheong Wa Dae.

South Korea predicts the North could carry out another round of military provocations, possibly a ballistic missile launch or even a nuclear detonation, over the weekend to celebrate the anniversary of its ruling party's foundation which falls on Monday.

The U.N. Security Council is currently in the process of adopting a tough resolution to penalize North Korea for conducting its most recent nuclear test. 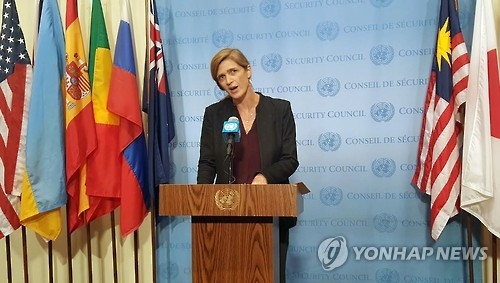