SEOUL, Oct. 7 (Yonhap) -- South Korean girl group HighTeen has dropped a second teaser video of "Boom Boom Clap," the title track of their mini album in anticipation of their debut.

In the teaser, the members are full of life as they display various facial expressions and bubbly shimmies. Moreover, the lively and vibrant colors in the background of the music video spices up the cheerful atmosphere.

The four-member act, comprised of Hae-ju, Eun-jin, Hae-bin, and Sae-ah, will kick off their promotional activities with the release of their long-anticipated mini album on Oct. 14 by Illusion Entertainment.

Even before the official debut, the girls previously caught media attention with their claim that none ofthe members has undergone plastic surgery. 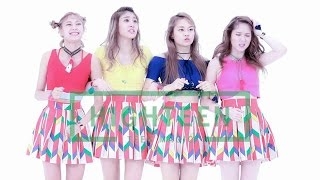