South Korea will face Iran at Azadi Stadium in Tehran on Tuesday for their fourth match in the final Asian qualifying round for the 2018 FIFA World Cup. Both Iran and South Korea have seven points with two wins and a draw in Group A, where they are paired with Uzbekistan, Syria, China and Qatar. Iran, however, are the leaders of the group with superior goal difference to South Korea.

South Korea have never won at Azadi Stadium in six trips, with only two draws and four losses. The Taeguk Warriors suffered a 1-0 loss in their last match there in November 2014.

Ki said it's going to be a tough match for them, but the players are ready to put forth their all-out efforts to deliver a good performance.

"I think it's about time to win (in Tehran)," Ki said at Incheon International Airport before flying to Iran. "If you look at our players' talent, I'm sure that we'll have a good game."

The Swansea City midfielder admitted that the time difference, intimidating fan atmosphere and high altitude of Azadi Stadium serve as disadvantages for South Korea. However, he said that the players are prepared both mentally and physically.

"We'll play like this is our final match," he said. "We know that a victory in Tehran will put us in a great position in this qualifying stage."

South Korea lost to Iran 1-0 in each of the last three meetings after conceding a goal in the second half. Ki said the players have learned from the past and they are ready to avoid the same mistakes.

"In previous matches, we had no regret about our performance on the pitch, but the result matters," he said. "Most of the time, we gave up a goal late in the second half and lost, but now, the players have enough experience."

Ki, who has 10 goals in 88 international matches, said South Korea will try to at least collect a draw in Tehran.

"I know we're not going to be 100 percent fit in just three days (after playing Qatar)," he said. "In the final round, each point matters, so we will at least try not to pick up a loss there."

Ki added he has big expectations of Son Heung-min. The Tottenham Hotspur attacker scored the winner against Qatar on Thursday in South Korea's 3-2 victory, keeping his red-hot club form even on the international stage.

"Son takes up a big portion of our attack and he should," Ki said.

Ki, who opened the team's scoring against Qatar, said the players should be wary of yellow cards. Against Qatar, South Korea were down to 10 players in the second half after defender Hong Jeong-ho was sent off with his second yellow card of the night. Ki also was booked in the 76th minute.

The former Celtic and Sunderland player will miss World Cup qualifier against Uzbekistan next month if he is booked again in Tehran.

"Iranian players will play a more physical game than Qatari players," he said. "But if we only think about getting booked, we won't be able to show our true potential." 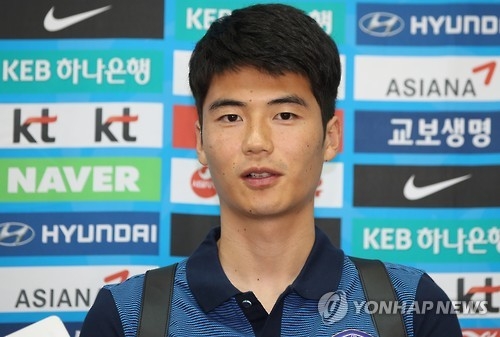