Park has kept herself updated on the fluid security situation on the peninsula and ongoing efforts to craft tough U.N. Security Council sanctions over the North's Sept. 9 nuke test, though her focus on defense has been stymied by a typhoon, earthquakes and relentless political offensives.

"Above all, (formulating) responses to the North Korean nuclear issue is the president's foremost priority," a presidential official told Yonhap News Agency, declining to be named. 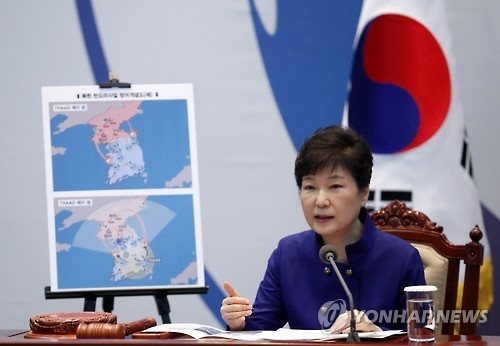 Since Pyongyang's fifth and most powerful nuclear test to date, the commander-in-chief has repeatedly displayed her resolve to address the North's evolving military challenge, which she said poses "tangible, existential threats" to South Korea and beyond.

Park's ramped up rhetoric against the provocative state illustrated her sense of urgency regarding the North's nuclear and missile programs.

The president has underscored that Pyongyang has a "fanatical obsession" with nuclear arms, which are like a "dagger to our throats," and that its nuclear ambitions would only lead to the communist regime's self-destruction. In August, she called the North's decision-making system "irrational" and its leader Kim Jong-un "hard-to-predict."

Pyongyang's growing menace has led Park to push for a bolstering of her country's alliance with the U.S. -- a development that has complicated her endeavors to build trust with China, the country's crucial partner for the denuclearization of North Korea as well as trade.

"The most effective means to curb North Korea's fanaticism is the combined defense posture based on the South Korea-U.S. alliance," Park said during a luncheon that she hosted for top U.S. Forces Korea (USFK) officials, including USFK flag officer Gen. Vincent K. Brooks. 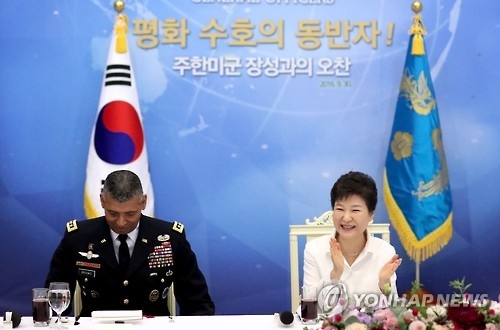 To counter the North's ballistic missile threats, the president has pressed ahead with the allies' decision to place a Terminal High-Altitude Area Defense battery, a core element of the U.S.' global missile defense program, which Beijing and Moscow argue would undermine their strategic security interests.

She repeatedly called the deployment decision a "minimal, self-defense" step to safeguard the nation and its people.

Park has also been stressing the need to strengthen -- or flesh out -- Washington's extended deterrence, the U.S.' stated commitment to mobilize all military assets, both nuclear and conventional, to defend its allies in crisis.

Her security drive, however, has been beset by a string of hurdles.

During a parliamentary audit this month, opposition politicians have been churning out a raft of rumors ranging from her retirement residence to her aide's purportedly inappropriate ties to two cultural and sports foundations.

The presidential office Cheong Wa Dae has dismissed all allegations, repeating "They do not merit any attention."

Despite international excoriation, the wayward regime in Pyongyang has continued to ratchet up cross-border tensions through seemingly perennial saber-rattling, including last month's ground test of a new rocket engine, seen as being designed for an intercontinental ballistic missile.

Seoul officials and experts have warned of the possibility that the North could conduct another nuclear test or test-fire a long-range ballistic missile to mark the 10th anniversary of its first nuke test on Sunday and the 71st anniversary of the founding of its ruling Workers' Party the following day.

As for the possibility of a sixth nuclear test, Seoul policymakers and experts believe Pyongyang is technically ready for it and will determine when to conduct it based on its reading of political situations.

"Our perception is that North Korea can engage in another provocation at any time," a presidential official said on condition of anonymity.

Some pundits say the North could stage a major strategic provocation around the U.S. presidential election, slated for Nov. 8, to call fresh attention to the regime and set the mood for negotiations -- possibly on arms reduction rather than denuclearization.