Outbound shipments of vehicles came to 156,680 units in September, down 23.7 percent from 205,274 units tallied a year earlier, according to the Ministry of Trade, Industry and Energy.

It marked the steepest on-year decline since October 2009, when the figure posted a 24-percent drop in the aftermath of the 2008 global financial crisis.

The total value of overseas shipments also tumbled 24 percent on-year to US$2.42 billion in September, with a 5.1-percent on-month rise.

As a result, total output by five local automobile companies slumped 22.7 percent on-year in September to 258,026 units from 333,759 due to the walkouts.

Domestic car sales, including sales of imported cars, fell 13.8 percent on-year to 128,674 units last month partly because of the end of a government-led tax-cut program on passenger cars on June 30. 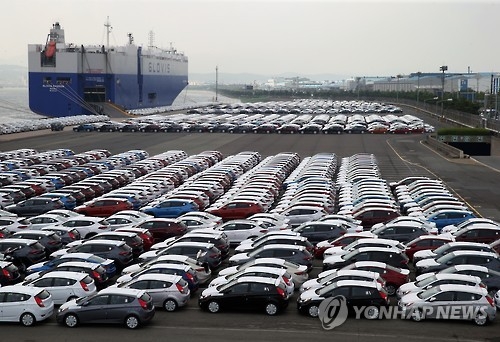