It has sent some 7,000 soldiers and 24 heavy machinery vehicles, such as excavators and dump trucks, to such cities as Busan, Ulsan and Gyeongju that have been affected by the typhoon, to help clean up the damage, it said in a statement.

A day earlier, some 5,500 soldiers were mobilized in the same restoration efforts. They mainly helped typhoon victims clean up their belongings, collect floating waste and remove earth and sand from streets. 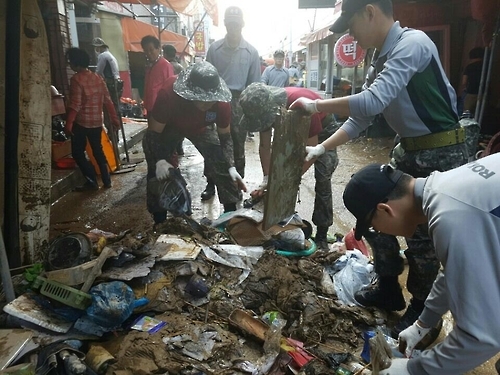 At least seven people were killed in the disaster, according to the Ministry of Public Safety and Security.

The typhoon also damaged crops on some 7,500 hectares of farmland and inundated 508 houses along with another thousand vehicles. Almost 200 people from 90 households have been evacuated from their homes due to flooding.