SEJONG, Oct. 7 (Yonhap) -- South Korea has agreed to invest an additional US$90 million in a trust fund in the World Bank Group for the next three years in a bid to expand its participation in the world organization, the finance ministry here said Friday.

"The funding will strengthen partnership between South Korea and the World Bank and boost the country's status there," South Korea's Finance Minister Yoo Il-ho said at a signing ceremony in Washington on Thursday (local time), which was also attended by Korea-born World Bank President Jim Yong Kim.

Yoo is on his U.S. trip to attend the conferences of the World Bank and the International Monetary Fund, as well the G20 Finance Ministers and Central Bank Governors meetings.

South Korea has contributed $30 billion every year to the Korea-World Bank fund since 2013, a fund that is aimed at supporting economic development and transferring knowledge and experience to low-income countries.

At the meeting, the two leaders shared their views on South Korea's expanded participation and contribution to the organization.

Kim, who took office in 2012, was confirmed to serve another five years as president of the World Bank, starting from next year. 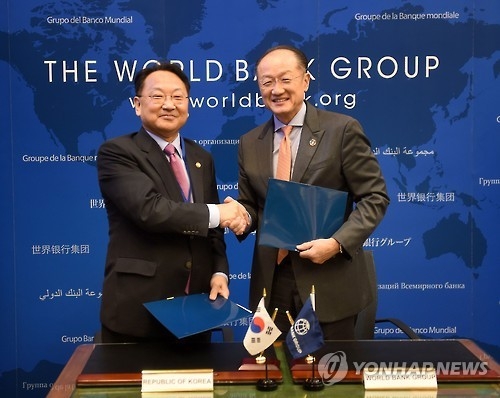