NEW DELHI, Oct. 7 (Yonhap) -- An Indian university with an enrollment of 3 million students plans to offer a course on learning the Korean language and Korean studies via one of its TV channels starting in December, the South Korean Embassy in New Delhi said Friday.

Indira Gandhi National Open University filmed the first of the 40-installment course, along with South Korean Ambassador to India Cho Hyun, at an in-house studio the previous day.

The course includes 32 installments on Korean learning that Kim Do-young, an East Asia professor at Delhi University, will take charge of.

Also introduced in the course are installments on South Korean politics and history to be made with Indian experts on South Korean affairs and others on culture, business entities and tourism resources in the East Asian country.

The Indian school, established in 1985, is one of the world's largest universities and has three TV channels, a network of 67 regional centers and around 2,667 learner support centers.

It has been discussing ways with the South Korean mission to establish a regular course on the Korean language and Korean culture next year.

Kim, who is responsible for the envisaged course's curriculum, hoped that "this course will help the Indian people as well as the school's students understand South Korea." 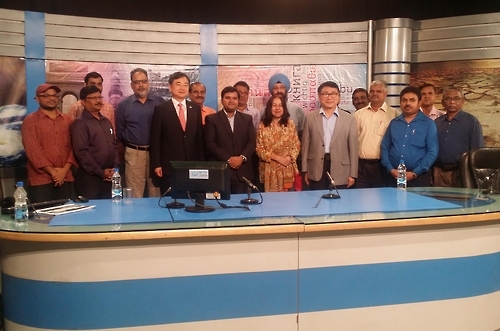