SEOUL, Oct. 7 (Yonhap) -- Joint Chiefs of Staff Chairman Gen. Lee Sun-jin said Friday it is necessary for South Korea to review the possible development of its own nuclear-powered submarines, citing the rising provocations from Pyongyang.

"It is necessary to review (building nuclear-powered submarines) along with considerations of military utility, technological capabilities, funds and trends in neighboring countries," Lee said during the regular audit held at the National Assembly.

A nuclear-powered submarine can stay submerged and hidden as long as it has fuel and supplies for the crew, making it harder to track compared to conventional diesel-electric subs that usually have to surface to operate a diesel engine to recharge battery banks.

Such vessels can be assigned to patrol around North Korean submarine bases without being detected and then trail boats armed with submarine-launched ballistic missiles (SLBMs). If the need arises, the submarines can sink North Korean adversaries before they can launch their missiles.

Lee, however, said the military has not yet made an official review of developing nuclear-powered submarines.

The chairman said he will continue to discuss the matter with the defense ministry.

The remarks, meanwhile, come as there are growing calls within South Korean society and political circles for Seoul to acquire nuclear-powered subs like those operated by Britain and France to better cope with North Korean threats.

The North said it successfully launched an SLBM on Aug. 24 that Seoul confirmed flew some 500 kilometers. 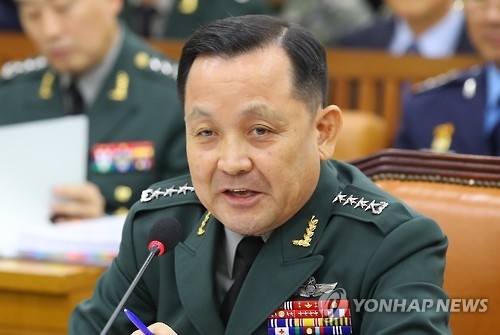