BUSAN, Oct. 7 (Yonhap) -- Lee Sang-il, a third-generation Korean-Japanese helmer, said on Friday his latest movie "Rage" is about trust between human beings and how vulnerable this confidence can be.

The murder mystery was screened in the Gala Presentation section of the 21st Busan International Film Festival (BIFF) in this South Korean port city.

"Rage is a mystery thriller about finding out who committed a murder. But what I really meant to tell in this was why people doubt or come to believe others," the director said during a news conference for the movie at BIFF.

"We often lose people by doubting them or fall in peril because we believe others too easily. Diverse emotions created in human relationships bring happiness or misery. Nonetheless, I wanted to say that we must not give up efforts to believe someone." 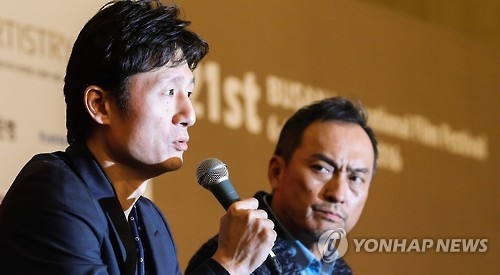 Lee said he thinks this is a universal theme that is not limited to today's Japanese society.

"Modern societies commonly lack the process of revealing what's in one's mind and having others feel it."

This screen adaptation of a best-selling novel by Japanese author Shuichi Yoshida starts with a brutal slaying of a couple in a suburban residential area in Tokyo. Police distribute photos of a prime suspect, Yamaguchi, a young man with a history of disturbed behavior, on television but his whereabouts are unknown.

One month after this attack, three men suddenly appear in very different settings. They are Tashiro, who comes to work as a dockworker in a fishing village in Chiba; Naoto, who is in a homosexual relationship with another character, Yuma, who works for an advertising agency; and Tanaka, who lives alone on a remote island near Okinawa.

Because of their close resemblance to the fugitive being sought, those who are closest to the three apparent drifters have suspicions about their past and begin to connect them to the Tokyo murder case.

This marked his second cinematization of a novel by Yoshida after "Villain" in 2010. 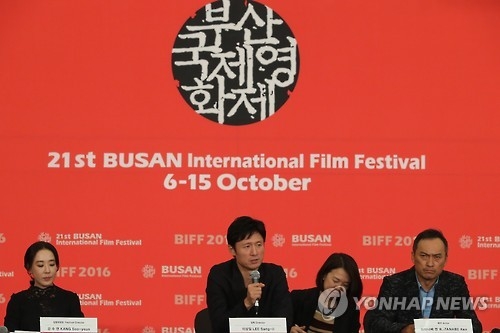 Asked about the appeal of Yoshida's books, Lee answered, "He creates a fictional world, but what attracts me the most is that there are no lies in it. He didn't clearly describe the motive of murder in the novel 'Rage' and I heard that he did so because he made all efforts to figure it out but he couldn't. So I empathize with him for this particular thing."

"I occasionally heard news of the difficulties the Busan film festival has undergone for the past two years. I think my work was invited simply because it's title is 'Rage'," he said, drawing a big laugh from reporters.

"I'm utterly abhorred by somebody with big power trying to oppress something rightful. I deeply empathize with what the film festival has gone through."

This year's film festival is to run till Oct. 15, featuring 299 titles from 69 countries around the world.