During her speech at the 97th National Sports Festival in Asan, South Chungcheong Province, Park also pledged her government's support to find and nurture outstanding sports instructors to ensure that the country will become a "sports powerhouse."

"In our checkered history fraught with difficulties, Korean sports' can-do spirit has played a pivotal role in bringing our people together as one," the chief executive said at the opening ceremony of the festival in the city, some 95 kilometers south of Seoul.

Park, in particular, noted that the sports festival was held even during the 1950-53 Korean War, which she said highlights the "stern resolve" of the nation to never yield to any hardship.

"Athletes' sweat, efforts and indomitable will, which have been shown in various sports competitions either at home or abroad, have given national pride, hope and courage to citizens," Park stressed.

The president, then, reiterated her hopes that the government and citizens will join hands to make the 2018 PyeongChang Winter Olympics a success. She called the Games an opportunity to show to the world South Korea's "creativity and culture."

The weeklong sports competition has brought together some 32,000 athletes, referees and support personnel from across the nation. Athletes are to compete in a total of 45 events, including soccer, baseball, swimming and archery. 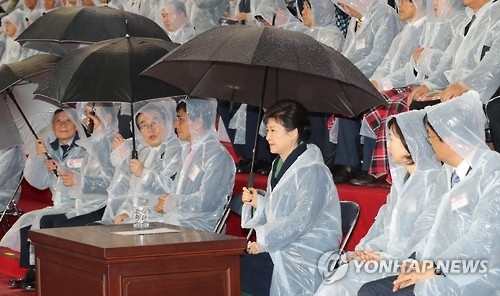