INCHEON, Oct. 7 (Yonhap) -- The Pittsburgh Pirates' infielder Kang Jung-ho said Friday he was far from content with himself despite a productive second season in the majors.

Kang returned home Friday for the first time since moving to the majors in January 2015, when he signed a four-year, US$11 million contract with the Pirates.

In 2016, Kang established career highs with 21 home runs and 62 RBIs, despite missing 59 games due to injuries. In 2015, Kang had 15 homers with 58 RBIs in 126 games, and finished third in the National League Rookie of the Year voting.

He didn't make his season debut until the first week of May, after rehabbing from leg injuries sustained on a hard slide by an opposing runner last September. He also missed time in August with a shoulder injury.

Kang became the first Asian infielder to hit more than 20 home runs in a major league season. He was named the National League Player of the Week for the first week of September.

"I think working hard during my rehab (from the leg injuries) helped me this season," Kang told reporters at Incheon International Airport. "I also feel that experience helped. My slugging percentage went up a bit, but I wasn't all that satisfied with my season. Teams are analyzing me a great deal and I have to put in the work, too." 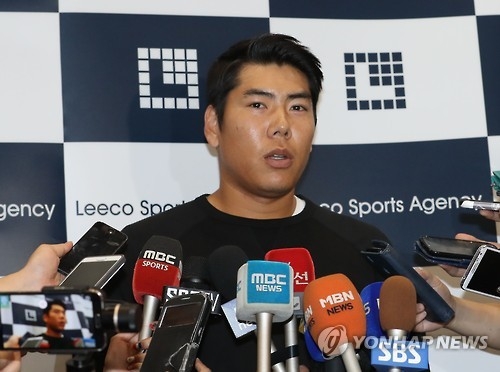 As for reaching the 20-homer plateau, Kang said, "Now that I am on a big stage, I have to think in terms of becoming a great player in the world, not just in Asia."

Kang has missed the postseason for the second straight year. The Pirates made it to the NL wild card game last year but he was injured. This year, they missed out on the playoffs for the first time since 2012, with a record of 79-83.

"I really wanted to play in the postseason this year, and I hold myself accountable for the team's poor season," he said. "Next year, I'll try to help the club make it back to the postseason."

When he was not hurt on the field, Kang dealt with issues off the field, as he faced sexual assault allegations that emerged out of Chicago in July. Chicago police recently said they've had trouble contacting the alleged victim, and Kang has been allowed to play and also to travel to South Korea in the meantime.

"I think only time will tell," Kang said when asked to comment on the situation. "The only thing I can do is to try to play good baseball."

Kang was named to South Korea's provisional 50-man roster for the 2017 World Baseball Classic. He was primarily a shortstop in the Korea Baseball Organization (KBO) but has mostly played third base with the Pirates. His versatility and extra-base power could be a major asset for South Korea, as it tries to avoid its second consecutive first-round exit at the WBC.

South Korea will host the first round action at Gocheok Sky Dome in Seoul. It's the home stadium of Kang's former KBO club, the Nexen Heroes.

"I'd love to represent the country, and I am preparing for that tournament," he said.

Kang never got to play at Gocheok Sky Dome, because the Heroes moved into the park before this season. Still, competing at the home of his old club "will bring back some memories," he said.