In February, a three-member panel of the U.S. Court of Appeals for the Federal Circuit in Washington ruled that Samsung did not infringe upon the patents on "quick links," "slide-to-unlock" and "auto-correct" technologies, and therefore does not need to pay $120 million ordered by a lower court.

Apple appealed that decision, arguing that the panel relied on extra-record evidence "none of which, it said, was of record and that the panel appears to have located only through independent research," according to court records.

On Friday, a full panel of judges at the same court accepted Apple's appeal in a 8-3 decision.

Friday's ruling reinstated the 2012 verdict by a federal court in San Jose, California, that ordered Samsung to pay Apple US$119.6 million for violating the three patents.

The case is one of a series of legal battles between the two smartphone giants, and is separate from another case in which Samsung was ordered in 2012 to pay Apple $1.05 billion for violating Apple's patents. But that amount was later reduced gradually to $548 million.

That case is pending at the U.S. Supreme Court. 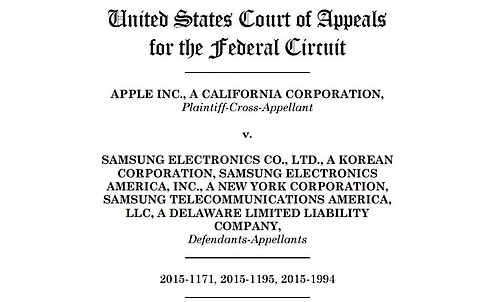