WASHINGTON, Oct. 7 (Yonhap) -- U.S. President Barack Obama signed into law legislation authorizing the establishment of a "Wall of Remembrance" in Washington that lists the names of all American soldiers killed during the 1950-53 Korean War.

White House press secretary Josh Earnest said in a statement that Obama signed Korean War Veterans Memorial Wall of Remembrance Act (H.R.1475). The bill was sent to the White House after passing through the House in February and the Senate last month.

The legislation, which was introduced last year by Rep. Sam Johnson (R-TX), a Korean War veteran, calls for authorizing the wall's establishment at the Korean War Veterans Memorial and allowing certain private contributions to fund the project.

The proposed wall would list the names of all members of the U.S. Armed Forces who were killed in action during the Korean War and list the number of all American prisoners of war and those missing in action, Johnson's office said.

The United States led the 21-nation Allied Forces to help South Korea repel the Chinese-backed communist troops invading from the North. More than 36,000 American soldiers sacrificed their lives, and 103,000 were wounded.

The war ended in a truce, not a peace treaty, leaving the divided peninsula still technically at war. 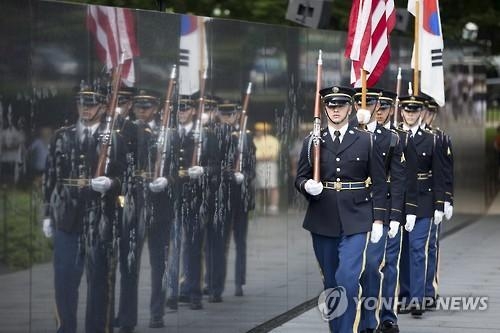