WASHINGTON, Oct. 7 (Yonhap) -- North Korea's nuclear and missile provocations must be stopped, but the international community should also leave the door open to the communist nation in case it reverses course, a top U.N. official said Friday.

"Since last year's fall, the DPRK has conducted two nuclear tests and 41 missile launches," Kim said during the conference held at the Center for Strategic and International Studies. "The provocative actions by the DPRK must stop."

Kim, a former South Korean diplomat and one of the closest aides to U.N. Secretary-General Ban Ki-moon, also said that the North's actions seriously undermine the international disarmament and nonproliferation regime.

"Maintaining the unity is crucial to responding to this challenge but in parallel with that efforts ... We must keep the door open to the DPRK for the future because we have to show to them once they reverse their course, there will be a lot of benefits they can get," he said. 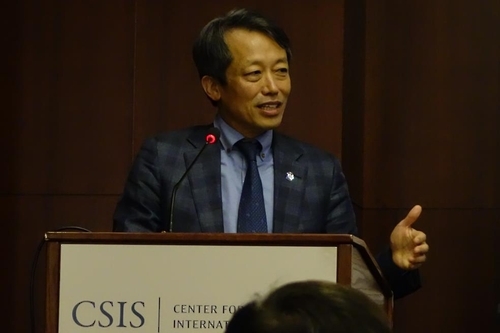 N.K. provocations must be stopped, but door should be left open to Pyongyang: U.N. official

N.K. provocations must be stopped, but door should be left open to Pyongyang: U.N. official