SEOUL, Oct. 8 (Yonhap) – Hyundai Motor Co.'s production line in the southern industrial city of Ulsan, which was earlier suspended due to flooding from Typhoon Chaba, is set to resume operation next week, South Korea's No. 1 carmaker said Saturday.

The production line, which manufactures the Santa Fe and Avante, was to start normal operations on Friday, however that plan was delayed as it is taking more time than expected to clear out the muddy water, a corporate official said.

Dozens of cars that were ready to be sent to customers were also flooded by the typhoon, resulting in shipment delays as well.

Another production line in Ulsan was also temporarily closed on Wednesday due to typhoon damage.

At least seven people were killed in South Korea when Typhoon Chaba struck the country's southern region with strong winds and heavy rains this week. 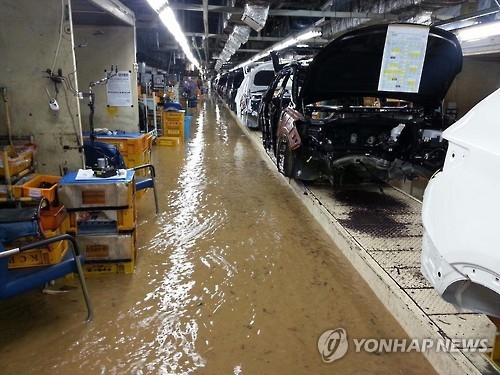