SEOUL, Oct. 8 (Yonhap) -- An academic conference on Arabic literature and language brought together Arabic scholars from South Korea and many Arab countries on Saturday, bringing the two cultures one step closer, the organizer said.

The conference was attended by South Korean professors, scholars and students of the Arabic language and literature, as well as eight distinguished professors from Jordan, Sudan, Qatar and Algeria, the association said.

The event was sponsored by HUFS, the Embassy of the State of Qatar in South Korea, the Saudi Arabian Cultural Mission in Seoul, and the Korea-Arab Society.

"The latest academic conference is a meaningful venue where many Arab scholars on the Arabic language and education of Arabic as a second language could mingle with Korean experts of the same sector and share their experience and know-how," said Hassan El-Malkh, dean of Faculty Arts and Humanities at Al al-Bayt University in Jordan, during the conference.

"Arabic language education was first offered in Korea in 1965 by none other than HUFS. So I am truly proud to see that, after just half a century, Arabic is now a full-fledged academic discipline and that we are able to attend this magnificent academic conference," Kim You-kyung, the Korean university's vice chancellor, said in a congratulatory speech. 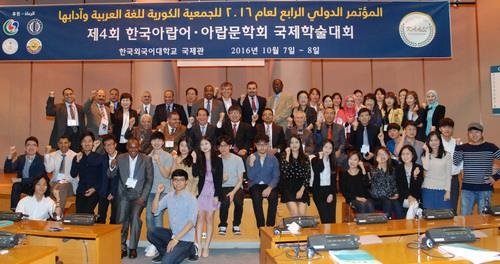