SEOUL, Oct. 8 (Yonhap) -- The United States ambassador to the United Nations on Saturday urged North Korea to stop any further nuclear provocations, adding that the world will "not be intimidated" by any actions taken by the Kim Jong-un regime.

Samantha Power made the remarks to reporters right after arriving in South Korea. She is to meet with key South Korean policymakers and share views on the ongoing negotiations for a fresh U.N. Security Council (UNSC) resolution aimed at punishing the North for carrying out a nuclear test early last month.

"Now we are looking to see what more can be done because, of course, another test was carried out at the beginning of September," she said. "This must stop. We are not intimidated by the action of the government of North Korea." 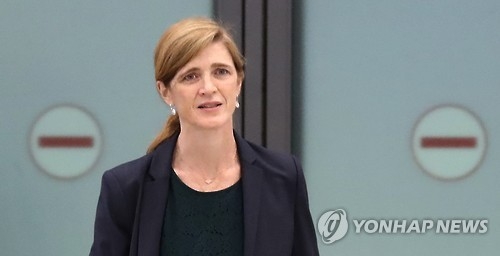 Power's visit takes place amid growing concerns that Pyongyang could carry out yet another major military provocation to mark the anniversary of the founding of its ruling Workers' Party that falls on Monday.

The U.N. ambassador's arrival in South Korea is seen as unusual since the UNSC is currently working on a resolution to penalize the North. She, however, said there is a clear reason for the visit.

"A threat just across the border here that is felt in such deep ways by the people in this country is also a threat felt by the people in the U.S. There is no sense that this is a distant threat and this is someone else's problem. We are in this together," she emphasized.

The ambassador noted that her visit to South Korea is aimed at having a chance to talk to its people and its leadership with regard to North Korea.

Power visited Japan before coming to South Korea. She is to stay here until Tuesday. Her tour of the two key Asian countries seems to be aimed at consolidating the alliance and help draft punitive measures against Pyongyang.

Known for her commitment to human rights issues, Power said that no less emphasis should be placed on the threat that the Kim regime is posing to its own people.

"The world has done a much better job in shining the spotlight on those crimes in recent years and I am here also to meet people who have suffered under the North Korean regime's rule," she said.