The move will increase the number of E-737s to six and give the Air Force better situational awareness, greater ability to gather signal intelligence and better control over its aerial assets. The presence of the planes can act as a deterrence against the North which does not have similar platforms.

The E-737s can also give Seoul the ability to better regulate and protect the country's Korean Air Defense Identification Zone from all possible intruders as nations in Northeast Asia have started vying to more effectively manage their airspace to deal with security threats.

"In the past there had only been speculation about increasing the size of the AEW&C fleet, but it has now been 'confirmed' to be part of the long-term acquisition plan," the insider who declined to be identified said.

He did not give a timeline for the procurement but long-term plans usually take some 5 years to get the necessary budget needed to start the project.

"The inclusion of the procurement is a clear sign that the military wants the planes," he said.

The move comes as inter-Korean tensions have flared over North Korea's fifth nuclear test on Sept. 9 and its threat to launch preemptive strikes on South Korea and the United States.

More E-737s will moreover make it easier for Seoul to keep such planes in the air around the clock, even if they have to undergo regular maintenance.

South Korea received its first Peace Eye in September 2011, with the fourth plane being deployed in October the following year.

The planes use L-band multi-role electronically scanned array radar placed on a "dorsal fin" on top of the fuselage that can scan a full 360 degrees and detect upwards of 1,000 airborne targets at once as well as conduct sea searches. The planes, based on the B-737 twin-engine passenger jet, can stay aloft for upwards of 10 hours at a time and are particularly effective at detecting low-flying airplanes that may try to penetrate South Korean airspace by taking advantage of the Korean Peninsula's mountainous terrain.

Besides South Korea, Australia and Turkey use the E-737 as an early warning, aircraft control and battlefield management platform. 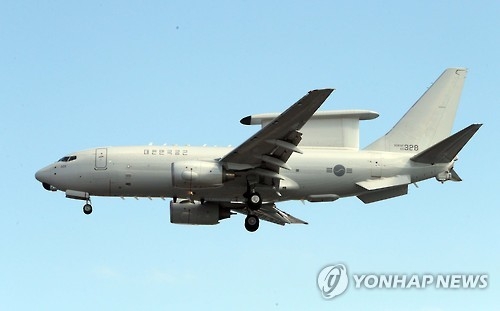