SEOUL, Oct. 9 (Yonhap) -- As the baseball regular season nears its finish line, it's been the tale of two finalists from last year going in opposite directions in 2016.

The 2016 Korea Baseball Organization (KBO) regular season will wrap up with two games Sunday, though playoff seeds have long been determined.

The Doosan Bears, which won the 2015 championship, picked up right where they left off and cruised to the pennant. They clinched the first place in the regular season on Sept. 22 and ended at 93-50-1 (wins-losses-ties), setting the single-season record for victories.

The Samsung Lions, who lost to the Bears in last year's Korean Series, will miss the postseason entirely this year. After taking the past five pennants and four of the last five Korean Series titles, the Lions went just 65-78-1 in 2016. Depending on Sunday's results, they will finish either eighth or ninth in the 10-team league. They had played in every postseason since 2010.

The Bears have earned the bye to the Korean Series. The NC Dinos, No. 2 seed, will advance straight to the second round for their third straight playoff appearance.

The Nexen Heroes have been a major surprise this year, as they finished third despite losing key pieces in the offseason.

Last winter, they lost two of their big boppers via free agency -- 50-homer man Park Byung-ho signed with the Minnesota Twins and slugging outfielder Yoo Han-joon joined another KBO club, the KT Wiz. Their bullpen was decimated by season-ending injuries to Han Hyun-hee and Cho Sang-woo, and by the departure of closer Son Seung-lak.

The Heroes are safely in the first round. They will face the winner of Monday's wild card game between No. 4 LG Twins and No. 5 Kia Tigers.

The higher-seeded club only needs to win one game to advance. If the Tigers win Monday, the two teams will meet again Tuesday, and the lower-seeded team will need to take that game as well to reach the next round.

No matter who makes it to the Korean Series, that club will face an uphill battle against the Bears, as complete a team as there has been in the KBO in recent memory. They had the best team ERA (4.45) and scored more runs (935) and hit more home runs (183) than anyone else.

They set a KBO record for most wins by starting pitchers with 75. Four starters -- Dustin Nippert, Michael Bowden, Jang Won-jun and Yu Hui-kwan -- combined for 69 of them, with each winning at least 15.

Nippert finished with a league-leading 22 wins and a 2.95 ERA, while Bowden led all pitchers with 160 strikeouts. Jang was second in ERA with 3.32. Together, they helped mask problems with the bullpen, considered the club's only Achilles' heel.

On offense, everything clicked from top to bottom, despite the departure of All-Star outfielder Kim Hyun-soo, who signed with the Baltimore Orioles in December.

Seven regulars batted over .300, and five of them had more than 20 home runs. Kim Jae-hwan, once a little-known catcher, blossomed into a premier slugger with 37 home runs and 124 RBIs, both third in the KBO. 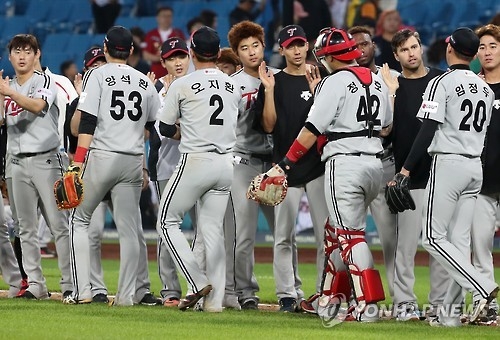 The Dinos, in their fourth year of existence, finished second in the second straight regular season. While putting up impressive numbers across the board on the field, they've had to deal with some off-field incidents that threatened to derail their season.

Their right-hander Lee Tae-yang received a 10-month suspended jail term in August on match-fixing charges, and police raided the Dinos' office in Changwon, South Gyeongsang Province, in their investigation into a match-fixing scandal involving another NC pitcher, Lee Jae-hak.

Sandwiched between the two cases was a DUI by Eric Thames, the reigning KBO MVP. On Sept. 30, the league suspended Thames, a 40-homer slugger for the second straight year, for the first game of the postseason.

The Twins and the Tigers made it to the postseason in the midst of rebuilding. The Twins, in particular, were only eighth at the All-Star break at 34-45-1, with mostly unproven 20-somethings getting their reps.

And those same youngsters, including 25-year-old closer Lim Jung-woo, stepped up in the second half. The Twins reeled off nine consecutive victories in August and had the second-best post-break record with 37-26-1.

The Tigers received solid seasons from veterans and young players alike. Lee Bum-ho, 34, and Kim Joo-chan, 35, paced the offense with 108 and 101 RBIs, respectively. Kim Ho-ryeong, at 24, emerged as one of the KBO's premier outfielders in center, while setting career highs in major offensive categories in his second full season.