SEOUL, Oct. 9 (Yonhap) -- An American starting pitcher and a homegrown outfielder were the two brightest stars in South Korean baseball in 2016.

Dustin Nippert, right-handed starter for the first-place Doosan Bears, appears to be the prohibitive favorite to capture the Korea Baseball Organization (KBO) MVP award. In yet another offense-happy season, Nippert led the league with 22 wins and a 2.95 ERA -- no one else keeping it under 3.00 -- while finishing seventh with 142 strikeouts in 167 2/3 innings.

At 22-3, Nippert also posted the best winning percentage with .880. 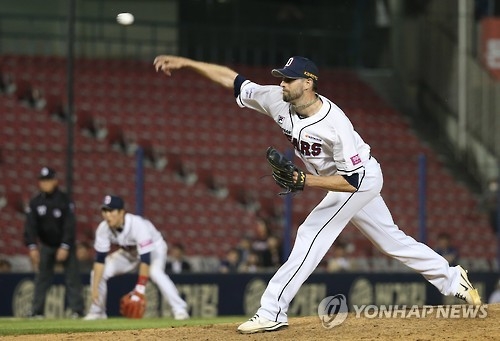 Nippert will look to become just the fourth foreign player to win the KBO's MVP honors after two former Bears, Tyrone Woods in 1998 and Daniel Rios in 2007, and Eric Thames of the NC Dinos last year. The KBO doesn't have a Cy Young-type award for the league's best pitchers, and pitchers have grabbed 12 MVP awards since the KBO's inception in 1982.

That the Bears cruised to the pennant with a league-record 93 wins should also help Nippert's cause. Thames, who had 47 home runs and 40 steals while winning the batting title last year, enjoyed another outstanding season in 2016 with 40 homers and 121 RBIs as the Dinos finished second to the Bears in the standings. It remains to be seen, however, if his late-season DUI, which earned him a nine-game suspension, will affect the MVP voting.

The other playoff-bound clubs -- the Nexen Heroes, the LG Twins and the Kia Tigers -- didn't receive MVP-type seasons from their lineups or rotations.

The best overall hitter may just have come from the most disappointing club. Choi Hyoung-woo, left fielder for the Samsung Lions, won the batting title with a .376 average while also leading the league with 144 RBIs, 46 doubles, 195 hits, 338 total bases and a 1.115 on-base-plus-slugging percentage (OPS). Choi also belted 31 home runs -- his third consecutive 30-homer season -- to rank seventh. 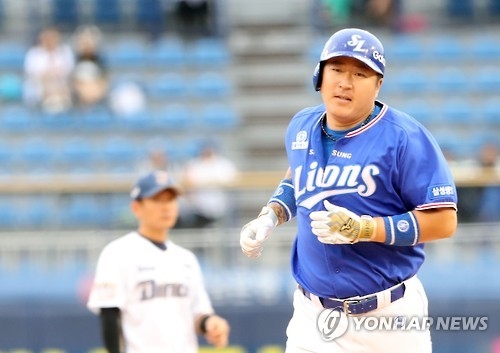 Despite Choi's heroics at the plate, the Lions will miss the postseason for the first time since 2009. They'd won four of the past five KBO championships.

While Choi's numbers stack up well against Nippert's pitching stats, their teams' performances may well be the tiebreaker.

The last MVP winner from a non-playoff team was Park Byung-ho in 2012, then with the Heroes. He led the KBO in homers and RBIs for the sixth-place club. Before Park, it was the Lotte Giants' right-hander Son Min-han in 2005.