SEOUL, Oct. 9 (Yonhap) -- The Korean writing system of hangeul is a key foundation for South Korea's drive for cultural prosperity and to become a leader in the global information technology (IT) sector, the prime minister said Sunday.

Delivering a speech to mark Hangeul Day in downtown Seoul, Hwang Kyo-ahn stressed the Korean alphabet is playing a part in helping to promote the country's culture, as well as the Korean Wave, or "hallyu," which refers to the popularity of South Korean television shows and pop music around the world.

Hangeul Day commemorates the creation of the Korean alphabet, which is viewed by many as one of the simplest and most systematic writing systems in the world. It was created by King Sejong of the Joseon Dynasty (1392-1910) and his scholars in 1443 and promulgated three years later.

"The world recognizes the brilliance and originality of hangeul," the prime minister said, pointing to the Hunminjeongeum Haerye, which is listed as a world heritage by the United Nations Educational, Scientific and Cultural Organization.

Hunminjeongeum gives detailed explanations and examples of each letter of the Korean alphabet.

He added that even after 500 years hangeul has proven to be ideally suited to the information age and has played a critical part in South Korea's emergence as a leader in the global IT arena.

"The alphabet has even found its way into design, art and cultural content," the top policymaker said.

Hwang then said that the government, with the cooperation of various groups, plans to further support the growth of hangeul so it can be used more widely and contribute to the advancement of South Korean society and economy. 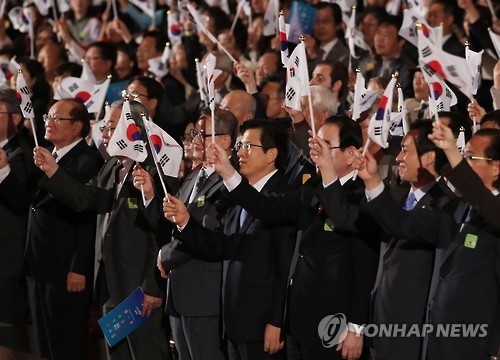