SEOUL, Oct. 9 (Yonhap) -- Seoul has invited Brazilian newlyweds to stay in the city for a month, during which time they can showcase the many sights and overall appeal of South Korea's bustling capital to a worldwide audience, a municipal organizer for the program said Sunday.

The couple in their 20s who live in Atlanta were picked for the "Romantic Seoul" event through an online contest carried out from June through September, the city said.

Those that submitted their bids outlined their plans to make video content that can best show the attractions of Seoul to those who are not familiar with the city of some 10 million people.

Seoul authorities said the couple will take selfies wearing hanbok or traditional clothing in Gyeongbok Palace, walk along Hanyang Doseong, the wall that surrounds the city, and visit the "Love Lock" area of N Seoul Tower that offers an unhindered panoramic view of the capital. They are also expected to take in the sights of cafe street in Iksun-dong located in Jongro-gu, where traditional hanok houses have been turned into trendy yet unique cafes. Iksun is a neighborhood with a large number of Korean traditional houses.

Besides the couple, the tour promotion program has invited an aspiring Colombian chef from Bogota and his mother to stay for a month. The two will visit the many traditional markets in Seoul, prepare and taste Korean food and go to a unique party dedicated to fried chicken and beer, a combination dubbed "chimaek" in Korean.

Organizers said the content made by the people taking part in the Romantic Seoul program can be viewed on its dedicated homepage at go.visitseoul.net or at the individual social media sites of the participants. 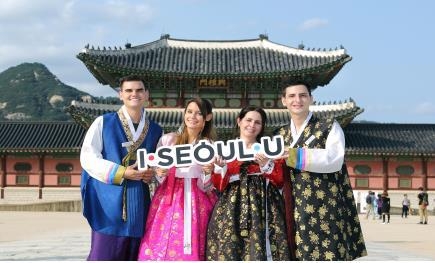